Red envelopes and the significance of tangerines explained in this Lunar New Year report from San Francisco Chinatown. This year is the 'year of the rabbit,' a year of hope.

Sunday, Jan. 22 marks the start of the Lunar New Year, one of the biggest celebrations in the world to usher in the arrival of spring.

More than a billion people worldwide will celebrate the Year of the Rabbit — as each year is named after one of twelve Chinese zodiac signs. Last year was the Year of the Tiger.

In China, where it’s known as the Spring Festival, Lunar New Year is the most important time of the year for family gatherings. It’s also celebrated in South Korea, Vietnam, Thailand, Mongolia and other Asian countries.

Here’s everything you need to know about the two-week-long festival.

When is Lunar New Year?

Lunar New Year begins with the second new moon after the winter solstice, so it starts on a different day each year. It marks the beginning of the lunisolar calendar. According to the University of California Irvine, Lunar New Year in 2023 starts on Jan. 22 and culminates on Feb. 5 with the Lantern Festival. 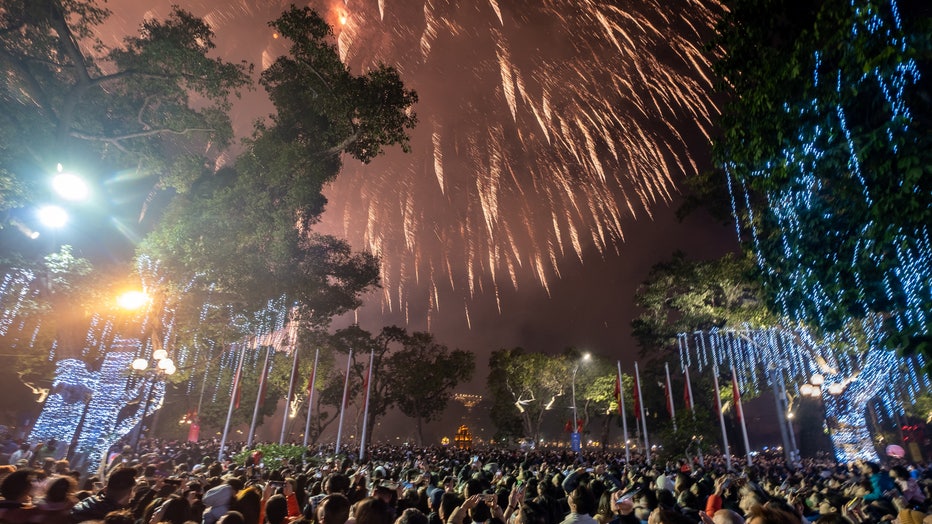 People watch a firework display to mark the Lunar New Year celebrations of the Year of the Cat in the Old Quarter on January 22, 2023 in Hanoi, Vietnam. (Photo by Linh Pham/Getty Images)

The Chinese government expected over 2.1 billion journeys to be made during a 40-day travel period from Jan. 1 through early February.

What are the origins of the Lunar New Year?

How the Lunar New Year came to be is still "somewhat obscure," researchers say.

One possibility is that it started some 3,500 years ago as animal worship in northern nomadic tribes, according to UC Irvine. 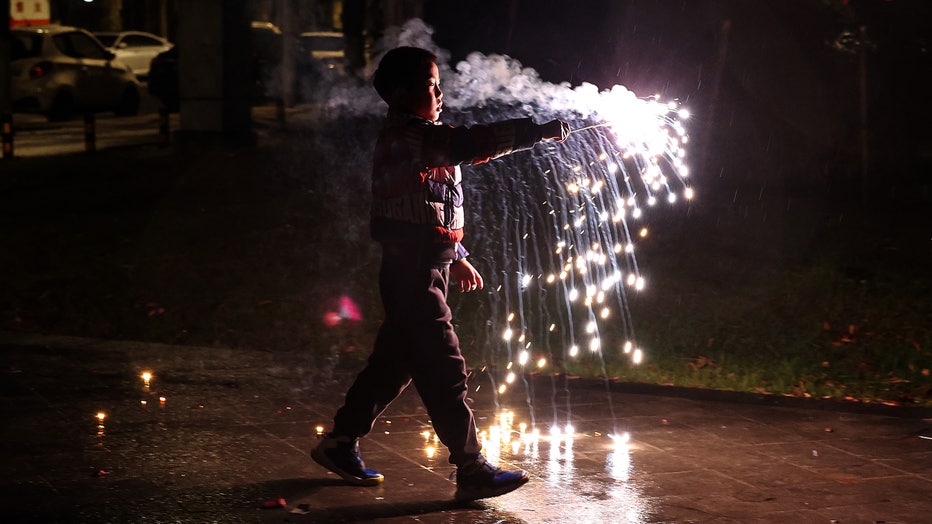 A young boy lets off firecrackers to celebrate the Spring Festival at a community open space January 21, 2023 in Wuhan, Hubei Province, China.(Photo by Getty Images)

In Buddhist lore, animals rushed to say farewell to a dying Buddha. Chinese folklore says it started as a contest among the animals when the Jade Emperor was picking palace guards.

"In either version, the ox was to be the first to arrive, but the rat cheated by riding on the ox’s back and made a last-minute dash to the finish line," UC Irvine professor Hu Ying says.

What is the Year of the Rabbit?

The rabbit is one of 12 Chinese zodiac signs the Lunar New Year follows. This year is known as the Year of the Rabbit. Hu Ying, a professor of East Asian studies at UC Irvine, says the rabbit is a sign of "longevity, peace and prosperity." 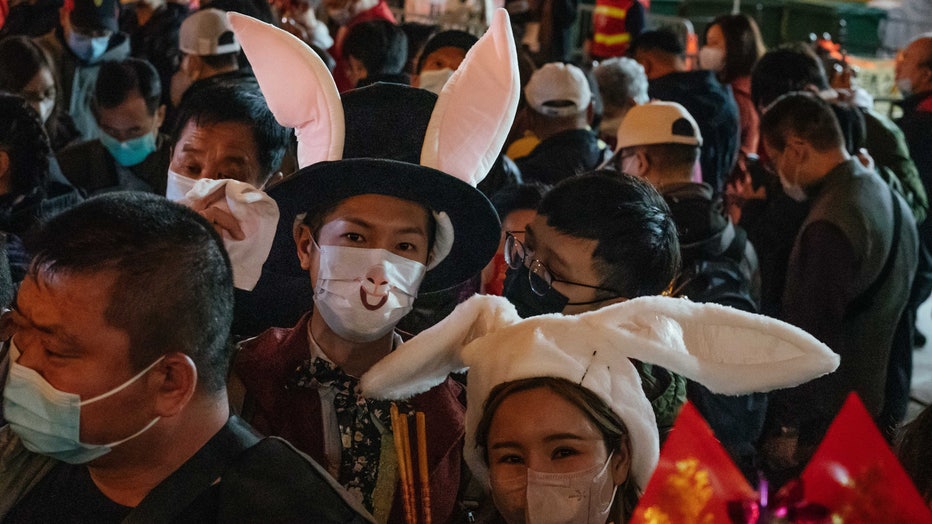 Worshippers dressing in rabbit costumes wait in line to make their first incense offerings in the early morning of first the day of the Lunar New Year on January 21, 2023 in Hong Kong, China. (Photo by Anthony Kwan/Getty Images)

"People born in a year of the Rabbit are believed to be vigilant, witty, quick-minded, and ingenious," Ying says.

In San Francisco’s Chinatown, where business owners are gearing up for big celebrations, Nancy Law with the Chinese Zodiac Store tells KTVU that people born in the Year of the rabbit are creative, highly intelligent, patient and peaceful.

READ MORE: SF Chinatown prepares to celebrate the year of the rabbit — a time for hope

How is Lunar New Year celebrated?

In China, red paper cuttings and red envelopes with money for children are among the many traditions associated with Lunar New Year. The Lunar New Year’s Eve reunion dinner kicks off the holiday. According to the National Museum of Asian Art, it’s a feast of symbolic dishes meant to bring good fortune. 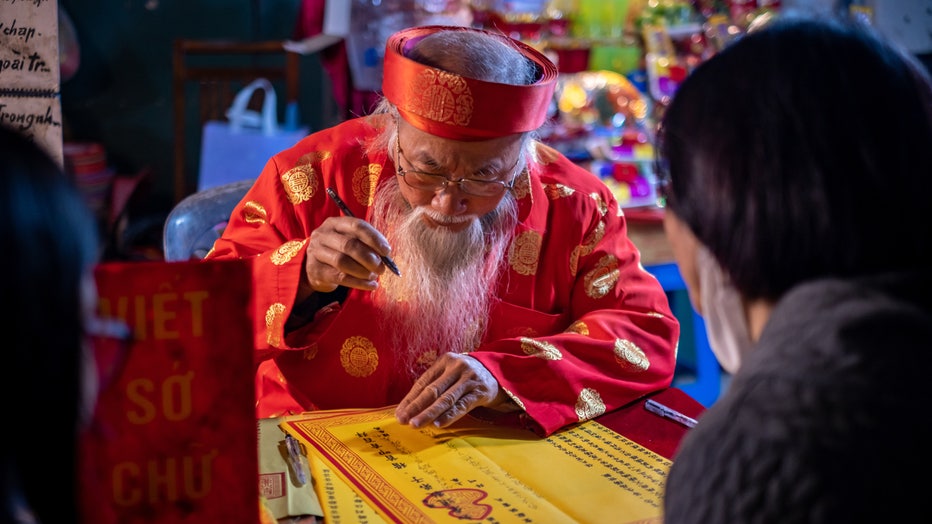 A calligrapher writes down wishes to visitors to mark the start of the Lunar New Year on January 22, 2023 in Hanoi, Vietnam. (Photo by Linh Pham/Getty Images)

Other activities include lion dances, dragon dances and open air market shopping, among many others.

On the 15th and last day of the holiday, people gather at the Lantern Festival to eat sweet rice balls and watch children carry lanterns around the neighborhood.

Hundreds of New Yorkers gathered in Queens on Saturday to celebrate the beginning of the Lunar New Year and the Year of the Rabbit.

In California, 2023 is the first year in which the Lunar New Year will be celebrated as an official state holiday, though state employees don’t get a paid day off of work. It’s the first time it’s been recognized as a formal holiday anywhere in the U.S. 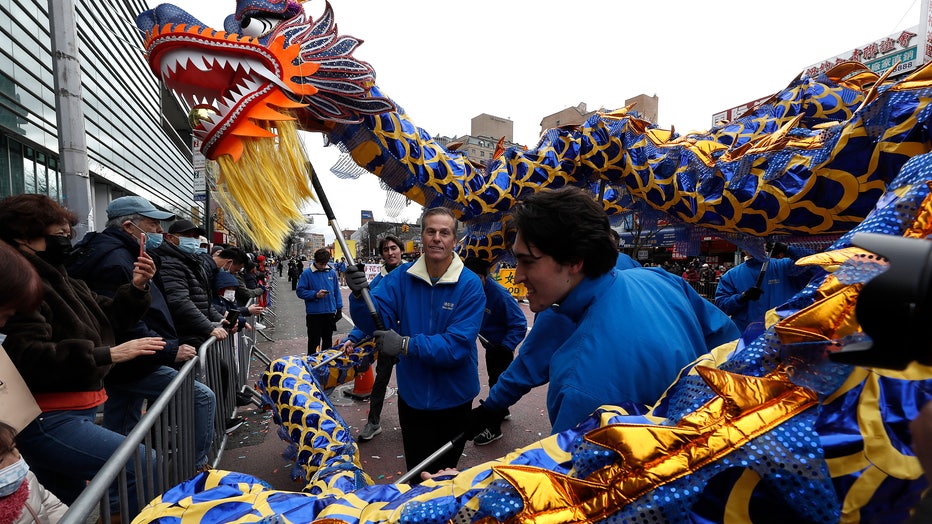 People participate in the 2023 Lunar New Year Parade on January 21, 2023 in the Queens Borough of New York City. (Photo by John Lamparski/Getty Images)

U.S. Rep. Grace Meng, a New York Democrat, proposed a bill last year that would have made Lunar New Year a federal holiday. That bill has stalled, The New York Times reports, but she plans to introduce it again on Friday.

In larger U.S. cities with bigger Asian populations, Lunar New Year is a big deal, with parades and other events to mark the occasion.