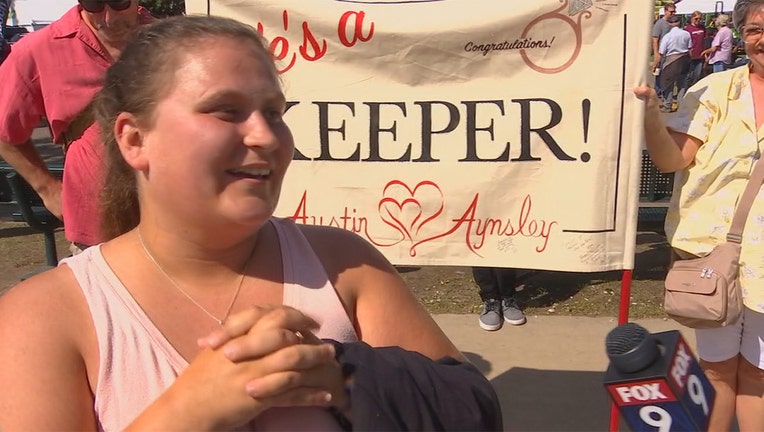 Aynsley Hohrman and her fiancé Austin Berg got engaged on top of the Ferris wheel at the Minnesota State Fair on Monday, the same place where they had their first date.

FALCON HEIGHTS, Minn. (FOX 9) - Forget the bucket of Sweet Martha’s cookies, at least one person is walking out of the Minnesota State Fair gates on Monday with something even sweeter: an engagement ring.

After matching on Tinder in 2019, Austin Berg and Aynsley Hohrman decided to meet at the Great Minnesota Get-Together for their first date. They got together, and it worked.

The following year, Austin’s plan to return to the State Fair to propose to Aynsley got postponed by the COVID-19 pandemic.

"They were going to do it last year, but COVID, so he didn’t know what to do," Austin's mother said. "And then this year, here we go."

Love at the Minnesota State Fair

Austin and Aynsley matched on Tinder in 2019 and had their first date at the Minnesota State Fair. Two years later, the couple returned to the Great Minnesota Get-Together and Austin popped the question at the top of the Ferris wheel, with all their friends and family hiding in the crowd below to surprise them.

The couple returned to the fair this year, and Austin had it all planned out for a Ferris wheel proposal. Their families had been hiding, but once the couple got on the ride they came out to cheer them on with a couple signs, which Aynsley apparently didn’t even notice.

"Yeah we were trying to show it off from over on the street over here and it was a little tough I suppose to see from a distance, but she can see it now," said family friend Dave Hanson.

They emerged from the ride an engaged couple. Her family had no doubt Aynsley would say yes.

"I was a 4H-er and so I spent most of my summers up here showing, so this means a lot," Aynsley said.

Aynsley knew the proposal was coming, but she didn’t know it would be at the State Fair nor that her whole family would be secretly on hand, as well as a television news crew.

"I'm excited because that's my best friend right there," she said.