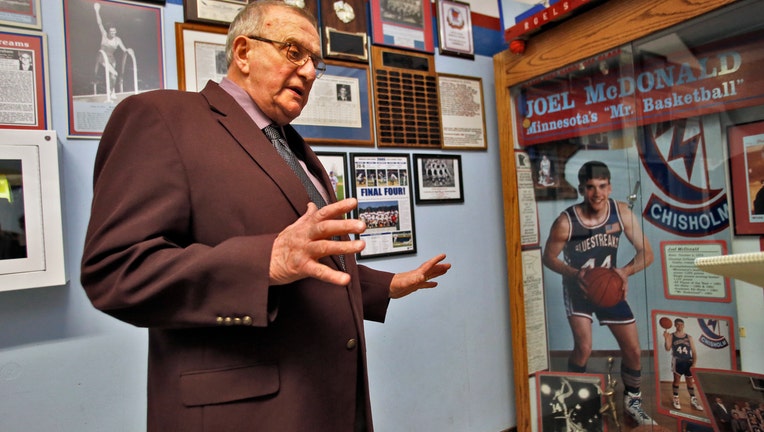 Profile of Bob McDonald, long-time head basketball coach at Chisholm High School. Coach McDonald talked about some of the basketball trophies on display in the hallways of Chisholm High, including the display of his all-time scoring leader son Joel M ((Photo By Marlin Levison/Star Tribune via Getty Images))

HIBBING, Minn. (FOX 9) - The most winningest Minnesota high school basketball coach in history, Bob McDonald, has passed away the age of 87 after testing positive for COVID-19, according to the Minnesota State High School League.

McDonald coached boys basketball for nearly six decades, accumulating a record of 1,012 and 428 losses. Most of that time - 53 years - was spent in his hometown of Chisholm, where his run included three state championships and 11 state tourney appearances. He ended his coaching career after the 2013 - 2014 season.

The most winningest Minnesota high school basketball coach in history, Bob McDonald, has passed away the age of 87.

"The legacy boils down to that Chisholm equals basketball. Everybody when they think of Chisholm or hear the name Chisholm, they think of basketball and they also think of Bob McDonald," Chisholm Activities Director Jamie Steinberg said. "I’ve got buddies in the cities and when I tell them where I work, the first thing they say is do you know Bob McDonald or how good is your basketball team? What Bob has done here is created a stigma for us in a good way."

Family members, former players and basketball fans took to social media to share their memories and honor him.

Bryce Tesdahl is one of 17 grandchildren of the McDonald family, and is currently a teacher and varsity boys basketball coach at Minnetonka High School.

"The wins and losses and the impact that he’s had is tremendous, but obviously just very thankful to have been a part of his life as his grandson for 30 years. Fortunate to witness his greatness being his grandson, on and off the court," Tesdahl said. "I think he’s everything to Chisholm, on and off the court. It doesn’t matter if he was working with youth or high school basketball, in the classroom, in the community, on the court, with his family. He always had his priorities straight, and he had certain expectations to live up to. In terms of what he means to us, he provided us an opportunity to be the first Minnesota family of basketball."