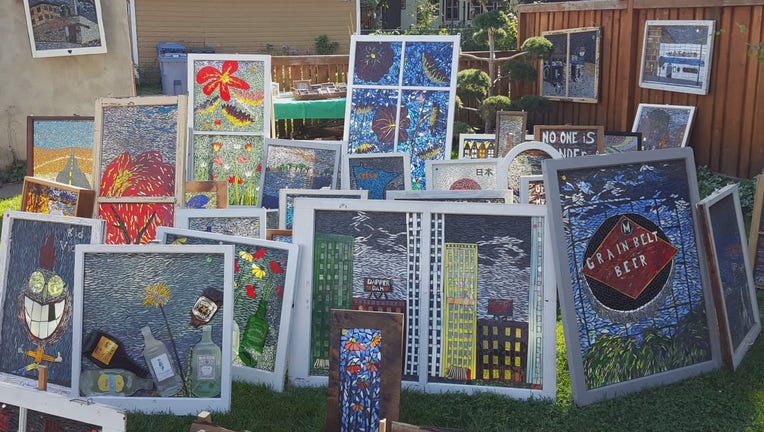 The LoLa Art Crawl is returning in September 2021 with an Artists' Weekend. (Supplied)

MINNEAPOLIS (FOX 9) - With the cancellation of the Uptown Art Fair for a second year, the League of Longfellow Artists is working to keep the south Minneapolis art scene thriving.

With the cancellation of the Uptown Art Fair for a second year, the League of Longfellow Artists is working to keep the south Minneapolis art scene thriving.

"This is distributed and residentially based," said Stephen Clark of LoLa. "Either in people’s front yards, backyards or home studios or in local small business owner-occupied retail space."

The event started with an initiative in 2009 to raise the visibility of artists living or working in the Greater Longfellow neighborhood. It has continued on for more than a decade.

"We really know that when we forge relationships as makers and generating ideas for where we’re taking our art in our own personal direction, we feed off each other," said Clark.

After a year off due to the pandemic and civil unrest, the event is back. With the cancellation of the Uptown Art Fair for a second year, organizers are working to keep the south Minneapolis art scene in the spotlight.

"Now I think there’s a level of interest in inviting additional communities, diverse communities to join the rich legacy that we have," said Clark.

The event will feature everything from pottery to glass textiles. In a community that's still healing, local artist Mary Sullivan hopes that LoLa's Artists' Weekend will help bridge communities.

"Each one of us building and creating, I think it reaches out to all the community," said Sullivan of Dock 6 Gallery.

"We know that the support for our recovering businesses is what is allowing the East Lake Street and Minnehaha intersection and Third Precinct to get revitalized and that reaches into the neighborhood and it absolutely are all expressions of how much proactive stake we have in our neighborhood moving forward," said Clark.

LoLa's Artists' Weekend will be held September 18 and 19. The organization is inviting local artists to participate. For more information, click here.