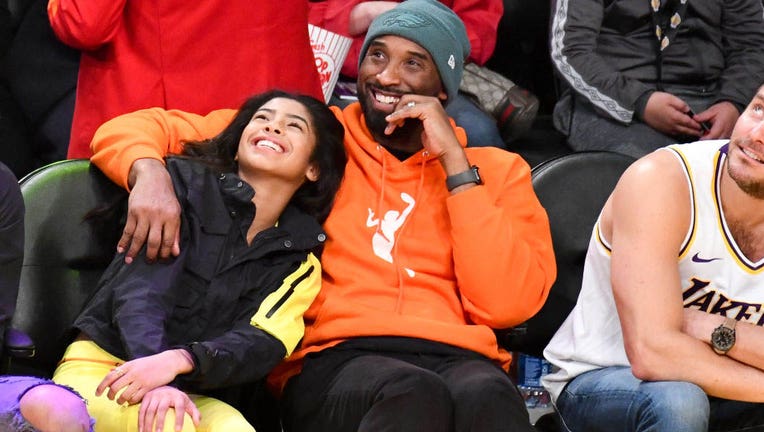 Kobe Bryant and daughter Gianna Bryant attend a basketball game between the Los Angeles Lakers and the Dallas Mavericks at Staples Center on Dec. 29, 2019 in Los Angeles, California. (Photo by Allen Berezovsky/Getty Images)

LOS ANGELES - A year after their tragic deaths, the enduring legacy of Kobe Bryant and his daughter, Gianna, lives on in many ways — including through a shared love of basketball.

The pair were often seen together at games, and he was known to gush about her tenacity as a player in interviews and on social media.

But on Jan. 26, 2020, the 41-year-old NBA legend and the 13-year-old, who often went by Gigi, died along with seven other people in a helicopter crash just outside of Los Angeles. The Bryants were traveling with two of Gigi’s basketball teammates, two parents, a coach and the pilot for a game at Bryant’s Mamba Sports Academy in Thousand Oaks, California.

"My beautiful, sweet Gianna – a loving, thoughtful and wonderful daughter, and amazing sister to Natalia, Bianka and Capri," her mother, Vanessa Bryant, said in the aftermath of their deaths.

The dreams of becoming basketball stars for Gigi and her teammates – 13-year-old Alyssa Altobelli and 12-year-old Payton Chester – were cut short. All three were part of AAU team the Los Angeles Lady Mambas and Bryant often coached the girls.

Gigi also dreamed of becoming a player on the University of Connecticut women’s basketball team. She and her father attended a few games at the school and Gigi was honored on the team’s bench following news of her death.

Bryant often said his daughter’s passion for basketball rekindled his own love for the game, especially after his retirement. He was also convinced she would create her own legacy as a force on the basketball court.

Many friends and fans remarked that Gigi was a bright young talent who had a future in the WNBA. During an interview on "Jimmy Kimmel Live!" Bryant said his daughter hoped to play on a professional team someday.

The pair were often seen together at games and he was known to gush about her tenacity as a basketball player in interviews and on social media.

The pair could be found at various NBA and WNBA games, caught on cameras dissecting players’ moves and enjoying the sport.

The Mamba & Mambacita Sports Foundation is the charitable organization linked to Kobe Bryant’s Mamba Sports Academy. The nonprofit aims to make a "positive impact through sports" on underserved communities according to its official website.

Kelly Hayes contributed from Cincinnati. A version of this story was originally published on Feb. 19, 2020.