A jellyfish was spotted swimming in a flooded yard in Galveston Island, Texas, on Sept. 14, 2021, after Hurricane Nicholas made landfall. Credit - Brad Thompson via Storyful

GALVESTON, Texas - A jellyfish was spotted swimming in a flooded yard near Galveston, Texas after Nicholas made landfall as a Category 1 hurricane this week.

Brad Thompson posted a Sept. 14 video on TikTok showing the translucent creature floating in the floodwaters in front of his home on Galveston Island, located about 50 miles southeast of Houston.

"What are you doing up here?" Thompson can be heard saying in the video.

Nicholas, the 14th named storm of the 2021 Atlantic hurricane season, made landfall early Tuesday and dumped rain on Texas’ Gulf Coast, including many on the barrier islands — resulting in flash flooding. 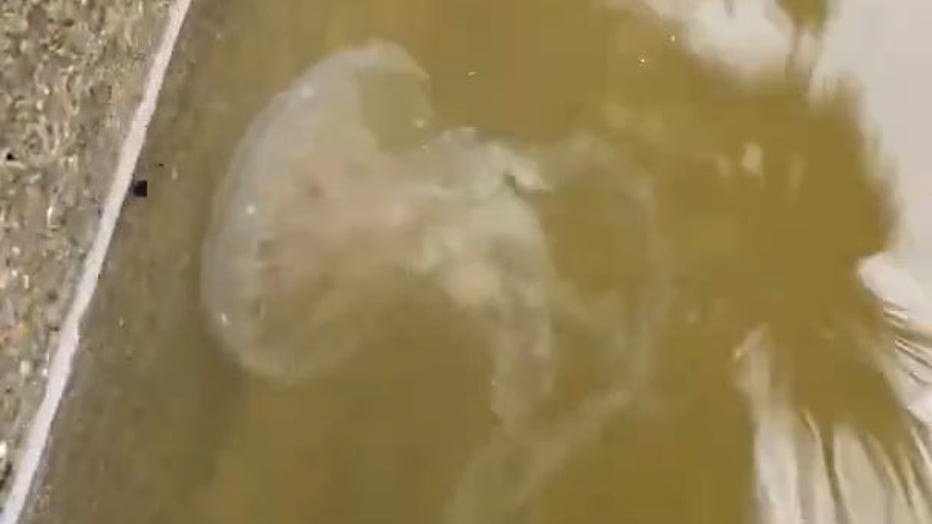 The jellyfish is seen in a video shared by Brad Thompson on Sept. 14, 2021, in Galveston Island, Texas. (Credit: Brad Thompson via Storyful)

The storm was quickly downgraded to a tropical storm and later a tropical depression.

As it hovered over the region, the storm brought the threat of excessive rainfall and the possibility of flooding in the coming days. Flash flood watches were in effect for portions of southeast Louisiana, across southern Mississippi and Alabama, and through the Florida Panhandle, through Friday.

In Texas, more than 57,000 people were without power on Thursday morning, including 6,400 in Galveston County, according to the utility tracking website PowerOutage.US. And in Louisiana, over 52,000 were still without electricity more than two weeks after Hurricane Ida made landfall on Aug. 29.