The United States has fought against the Taliban, al Qaeda and the Haqqani insurgent groups in Afghanistan for the last two decades, but counter-terrorism experts warn that the imminent threat ISIS-K poses could prove catastrophic. Following multiple attacks near the Kabul airport Thursday, specific perpetrators were unclear, though ISIS-K was feared to have possibly played a role.

The group referred to as ISIS-K is the "Khorasan" branch of the Islamic State, located in Afghanistan. Khorasan is a historic name for the broader region.

The insurgent group formed after a faction within the Taliban splintered and pledged allegiance to Abu Bakr al-Baghdadi – the leader of the Islamic State in Iraq and Syria – in October 2014.

By 2015 the offshoot ISIS-K became formally recognized as a terrorist organization, Katherine Zimmerman, a fellow in foreign and defense policy for the American Enterprise Institute, told Fox News.

Zimmerman explained that the group has an even more hardline vision of its interpretation of Islam than the Taliban, and that has established an adversarial dynamic between the two terrorist organizations. 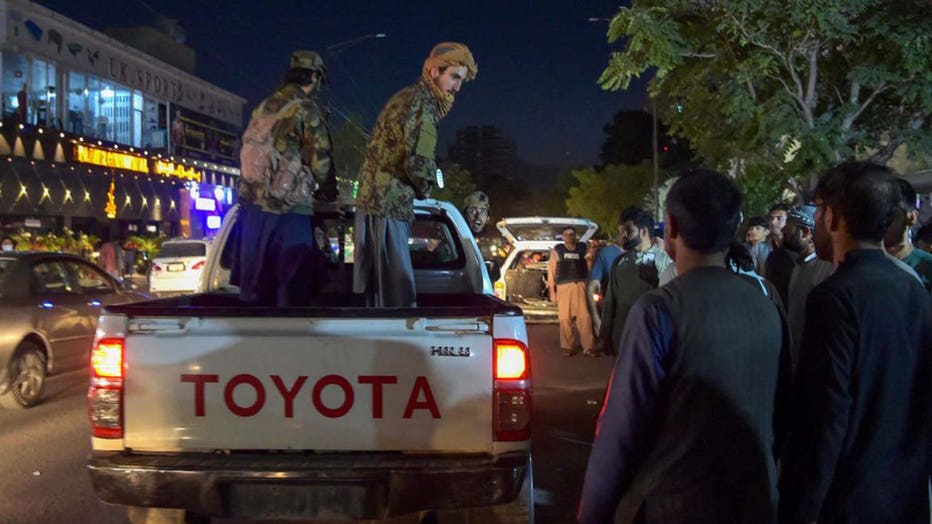 FILE - Taliban fighters stand on a pickup truck outside a hospital as volunteers bring injured people for treatment after two powerful explosions, which killed at least six people, outside the airport in Kabul on Aug. 26, 2021.

Why are they a threat in Afghanistan?

Since the collapse of Afghanistan with the Taliban takeover, thousands have swarmed to the airport in desperate attempts to flee the country.

The Taliban have taken to harsh beatings, firing weapons into the air and even barring people from airport access in an attempt to control the massive groups of people forming outside the airport gates.

But Zimmerman, a counter-terrorist specialist, argued that the greatest threat facing the thousands attempting to flee does not come from the Taliban, but rather from ISIS-K.

"The target of opportunity is there," Zimmerman said. "What the Islamic State has been able to exploit in other situations like this are soft targets.

"And that crowd around the Kabul airport is certainly one that it could target knowing that it is going to be able to get what it perceives to be legitimate victims – Afghans who are trying to flee to the United States or the west, who are not willing to live under Sharia law, who collaborated with the United States," she added.

Zimmerman said the real threat is the complexity facing intelligence and security personnel attempting to stop the threat of a suicide bomber walking into a crowd and detonating an explosive.

But the defense specialist pointed out that it is not only the Afghan citizens who face an imminent risk.

The Biden administration has repeatedly said the U.S. mission in Afghanistan is to secure the airport, which means the first line of defense comes from the exterior Taliban checkpoints.

"This fundamentally means the first point of security is when an individual walks up, manages to get through that crowd – which we’ve seen so many images of – to a gate where there are U.S. soldiers posted and the real challenge here is a suicide bomber."

"The potential for mass causalities has gone up significantly," she added.

How will ISIS-K affect Americans?

A former intelligence officer and senior fellow for the Hudson Institute, Michael Pregent, told Fox News that the threat emanating from the terrorist organizations in Afghanistan extends past the need to disperse the large airport crowds.

The counter-insurgency specialist argued that the reports of the Taliban blocking access to the Kabul airport and exit from the country are a sign that thousands will be left behind.

The former U.S. Central Command analyst said he has been communicating with contacts in Afghanistan who point to a far more sinister threat than blocking access to the airport.

Pregent said his greatest concern is that Americans and Afghan allies will not only be targeted by the Taliban and al Qaeda, but by ISIS-K members who could make an example out of them.

"I think we're going to have an American wind up on their knees with an ISIS flag behind them on the video camera," he said.

RELATED: Afghanistan evacuations: A look at where the situation stands ahead of US troop pullout

Is ISIS-K the biggest threat in Afghanistan?

The counter-terrorism experts agreed that the Taliban’s longstanding ties to al Qaeda could mean that despite the Taliban's assurances to the international community, that relationship could prove difficult to severe.

Pregent said his greatest concern is the potential for Afghanistan to become a training ground for jihadist terrorists using American tactics they have learned through the prolonged U.S. presence there.

"The Taliban is loyal to al Qaeda," he said. "They have not pledged loyalty to ISIS-K, but that doesn't mean they won't just pause their rivalries to go and make America bleed on the way out."