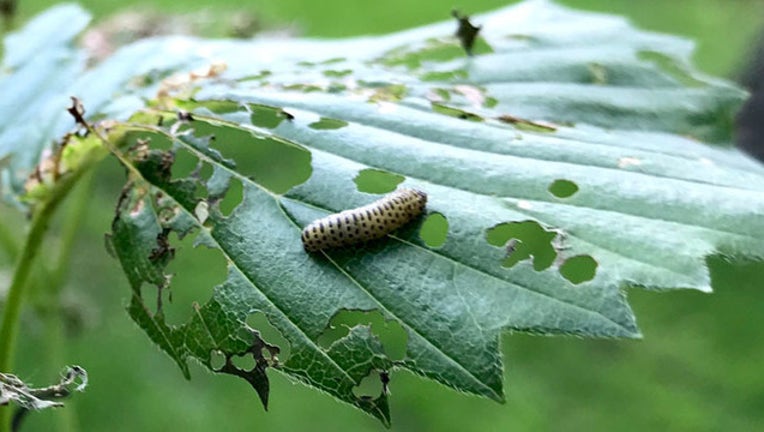 The larvae of the viburnum leaf beetle are yellow to light brown with black spots and dashes on their bodies. (Photo credit: Minnesota Department of Agriculture)

EDEN PRAIRIE, Minn. (FOX 9) - An invasive beetle that feeds on viburnum, a large-flowering shrub commonly used in home landscaping, has been found in Minnesota for the first time, the state Department of Agriculture announced Thursday.

An Eden Prairie resident first noticed the beetle feeding on arrowwood viburnum leaves in June and reported it to the MDA. The United States Department of Agriculture later confirmed it was the viburnum leaf beetle, an invasive insect native to Europe and currently found only in the northeastern U.S. and Wisconsin. They do not know how the beetle ended up in Minnesota.

MDA says the beetle feeds exclusively on species of viburnum and can defoliate the plant, which can weaken it over time and eventually kill it.

There are three primary ways to control the spread of the viburnum leaf beetle: planting viburnum varieties resident to the insect, pruning and destroying infested twigs or using chemicals.

The MDA is asking residents to be on the lookout for the beetle and to report any findings.