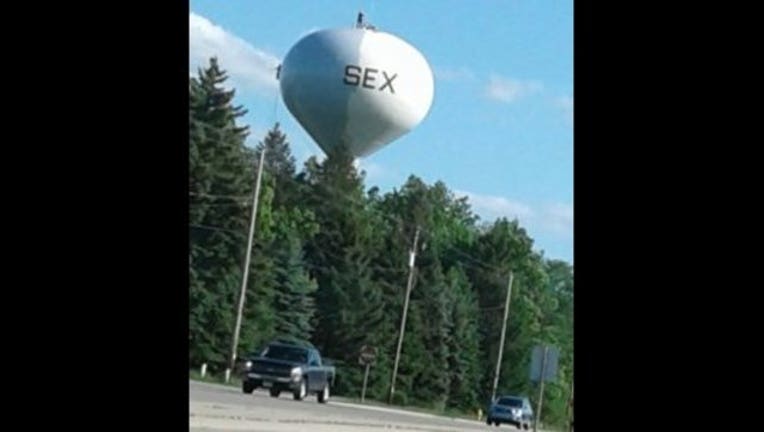 A half finished paint job on a water tower in Sussex, Wis., displayed a distinct three-letter word for a few hours Wednesday night into Thursday morning.

SUSSEX, Wis. (KMSP) - A water tower in Sussex, Wis., got a fresh coat of paint this week, but for a few hours Wednesday night into Thursday morning the project garnered more than a little attention.

Emblazoned on its side were three letters spelling out "S-E-X," which, to be fair, are the last three letters of the small town just outside of Milwaukee's name.

According to City Administrator Jeremy Smith, it's standard practice for the company that handled the repainting job, Utility Services Group, to write words backward--but he says after years of handling hundreds of similar projects across the country, the workers knew exactly what they were doing.

"I'm sure it was intentional on their part," he said. "The funny thing is that this happened on the same water tower in 1996 with a different company handling the project."

After going home for the day with the job halfway done Wednesday, crews were back at the tower Thursday morning and expected to have the project completed by the end of the day.

The company is under contract with the city for six years, so there isn't much the city can do in the way of punishment, but Smith says he's sure the company is reprimanding the employees over the incident.

For their part, the city and most of its residents are taking it all in stride.

"When I started getting texts that was how I found out. I certainly wasn’t expecting it,” Smith said. “But it’s just three letters and the world certainly won’t end.”