Footage posted on Instagram shows a tree falling in the strong winds in New Orleans on Aug. 29, 2021, after Hurricane Ida made landfall. Credit - young__polo_ via Storyful

BATON ROUGE, La. - Louisiana hospitals in the path of Hurricane Ida were forced to evacuate dozens of patients after the storm left them with pieces torn off their roofs, and water leaking down walls to pool on floors as they relied on emergency generators for electricity.

Ida smashed into the Louisiana coast as a devastating Category 4 hurricane Sunday at a time when most hospitals were nearly full with coronavirus patients. Hospitals that suffered the worst damage worked Monday to transfer patients to other medical centers in the state, while others kept operating on generator power.

At Lady of the Sea General Hospital in Lafourche Parish, near where Ida made landfall, the storm ripped away a significant portion of the roof. On Monday morning, members of the U.S. Coast Guard managed to fly in and evacuate about seven patients, Gov. John Bel Edwards said on a call with President Joe Biden and other governors. 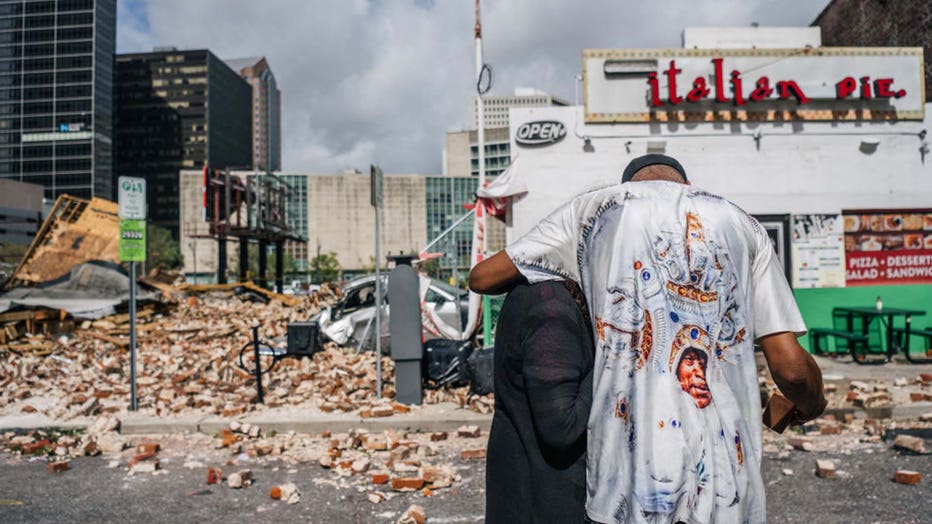 FILE - A man comforts a woman after Hurricane Ida passed through and destroyed a neighborhood building on Aug. 30, 2021 in New Orleans, Louisiana.

Despite the evacuations, those hospitals still had emergency rooms open Monday, he said. Other Ochsner Health facilities in New Orleans and elsewhere stayed fully open, even after water leaked inside after the storm blew off rooftop ventilation covers and broke a few windows. All were running on generators, and some used water from private wells.

"We know that we're in for several days, maybe a couple of weeks of this situation," Warner Thomas told reporters in a video conference Monday.

Kanter urged people to avoid going to hospitals if possible, saying they "will be busy" in coming days.

RELATED: How to help victims of Hurricane Ida

New patients had begun to show up Monday morning at emergency rooms seeking treatment for storm-related injuries. Thomas said he expects those cases will grow as residents doing repairs and cleanup break bones falling off ladders or cut themselves with chainsaws.

"It’ll be tight. It’s been tight throughout COVID, as we know," said Mike Hulefeld, Ochsner Health's chief operating officer. "We have adequate physical space ... but it's about having adequate people and staff."

Hulefield said Ochsner Health went into the storm with enough fuel to power generators for 10 days, and efforts to replenish that supply were underway. He anticipated no problems bringing in enough water, food or medical supplies.

Hospitals in Mississippi and Alabama have reached out offering to take in some of the company's patients, Thomas said, but so far administrators were finding room elsewhere in Louisiana.

Hurricane Ida moved inland in Louisiana after making landfall as a category 4 storm on Sunday, August 29, maintaining sustained winds of 130 mph into the afternoon. (Credit: Kendall J Washington via Storyful)

The Federal Emergency Management Agency said four Louisiana hospitals suffered damage from Ida and 39 medical facilities were running on generator power. FEMA included the figures in a public memo Monday. It did not specify which hospitals sustained damage.

Five Louisiana hospitals had evacuated their patients or were planning to do so Monday, said Kevin Litten, spokesperson for the Louisiana Department of Health. Litten did not say how many patients were being moved.

At Lady of the Sea General Hospital, where the Coast Guard rescued patients, CEO Karen Collins said in a message relayed Sunday on Facebook there were no injuries. The hospital’s phone system was down Monday.

Another Lafourche Parish hospital, Thibodaux Regional Medical Center, reported a partial generator failure Sunday that forced some patients to be moved. Louisiana state Rep. Tanner Magee of Houma said Thibodaux General's staff moved patients on ventilators through the stairwells to get them to another part of the hospital that had electricity.

Ida struck as hospitals and their intensive care units were filled with patients from the fourth surge of the COVID-19 pandemic, a wave fueled by the highly contagious delta variant and low vaccination rates across Louisiana.

An estimated 2,400 coronavirus patients were in Louisiana hospitals when the hurricane hit, according the governor.

Thomas said Ochsner Health was working to find temporary housing for potentially hundreds of staff unable to return home because of storm damage. He said that after 2005's Hurricane Katrina, many stayed in New Orleans hotels. But administrators are having to look outside the city after Ida, which severed power to all of New Orleans by inflicting massive damage to its electrical grid.

"I think the biggest challenge in the coming days is around our people," Thomas said. "We’re going to have lots of people who have damage to their homes."