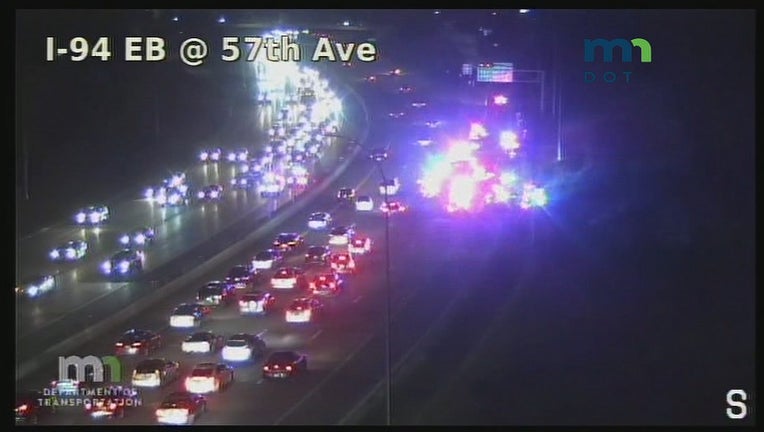 Police lights flash on the side of I-94 eastbound near I-694 as police investigate a reported shooting.

BROOKLYN CENTER, Minn. (FOX 9) - A 42-year-old Brooklyn Center woman has been charged after she told police she "accidentally" shot and killed her father while trying to break up an argument, according to a complaint filed in Hennepin County District Court Tuesday.

Takesha Monic Deadwyler is charged with first-degree and second-degree manslaughter.

On Saturday, police responded to a reported shooting on I-94 and 53rd Avenue North in Brooklyn Center. When they arrived, they found Deadwyler's father had been shot in the head. He later died at the hospital.

Officers learned Deadwyler, her father, a man and two minors were in the car when an argument broke out between the man and Deadwyler's father, the charges state. The two men began slapping and hitting each other, so Deadwyler pulled the car over. Deadwyler, her father and the man got out of the car. While trying to separate the two men, she pulled out her gun, racked it and pointed it at the man and told him to stop.

According to the charges, the witnesses still inside the car heard a shot ring out and saw Deadwyler's father fall to the ground. Deadwyler told police she shot her father, but that the gun "accidentally went off" while she was trying to separate the two men.

Deadwyler is in custody at the Hennepin County Jail. Her first appearance in court is scheduled for Wednesday.