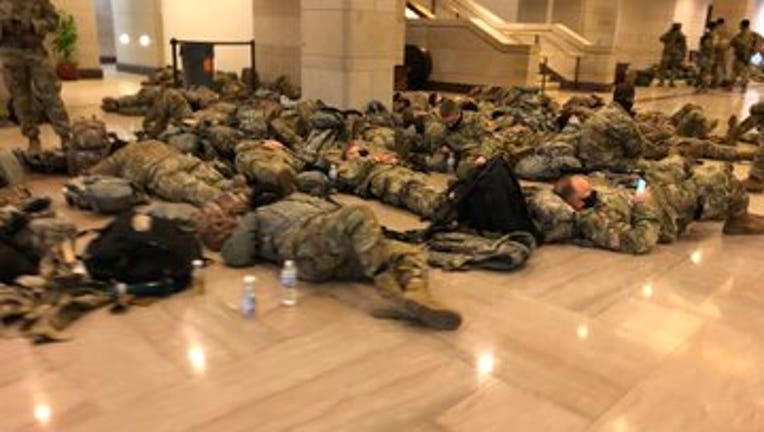 Several National Guard members are pictured lying on the floor of the U.S. Capitol on Jan. 13, 2021 in Washington, D.C. (Photo credit: Joe Roetz)

WASHINGTON - Hundreds of National Guard troops were pictured sleeping on the floor of the U.S. Capitol, called in to help protect the area a week after President Donald Trump’s supporters stormed the building in a deadly siege — leaving concerns for security in the days leading up to President-elect Joe Biden’s inauguration.

As many napped on the cold marble floor in the Congressional Visitor Center early Wednesday, the House moved toward impeaching Trump for a second time. Trump, facing a single charge of "incitement of insurrection," encouraged the mob of loyalists on Jan. 6 to "fight like hell" against election results just before they stormed the U.S. Capitol.

The National Guard members were pictured resting on the floor, many armed, with riot shields stacked nearby in the visitor center, a large underground addition to the Capitol complex. 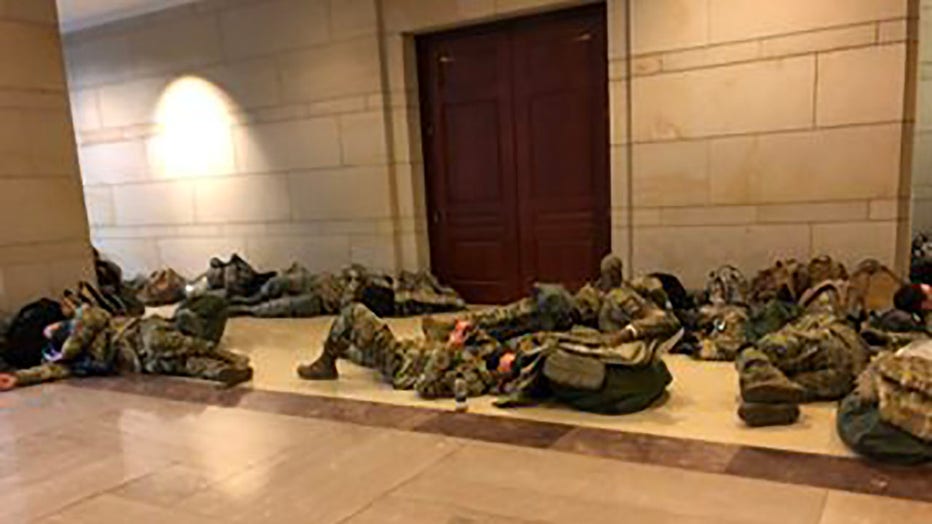 Several National Guard members are pictured lying on the floor of the U.S. Capitol on Jan. 13, 2021, called into to help protect the building and Washington, D.C. area in the wake of the deadly siege by a pro-Trump mob a week prior. (Photo credit: Jo 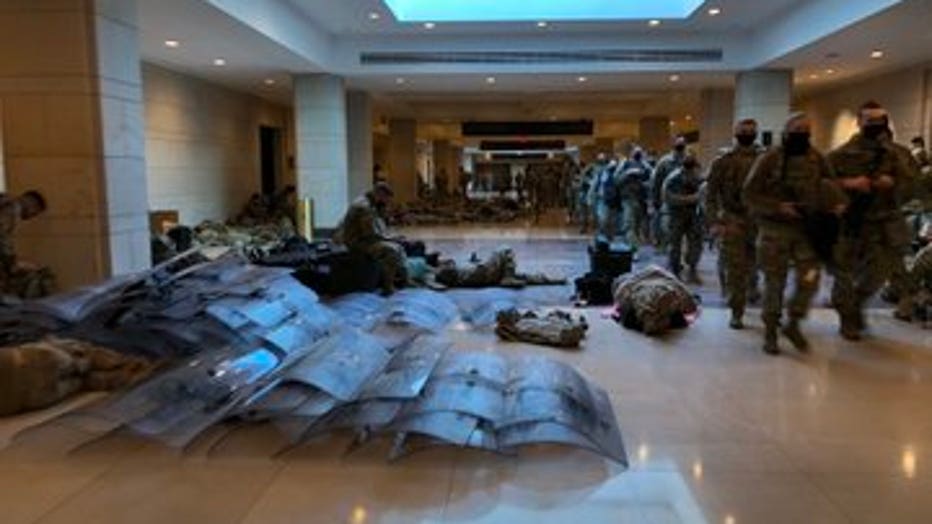 Several National Guard members are pictured in the U.S. Capitol on Jan. 13, 2021 with riot gear stacked on the floor. (Photo credit: Joe Roetz)

The heightened security comes as the FBI issued a bulletin warning of plans for armed protests at all 50 state capitols and in Washington ahead of Biden's inauguration on Jan. 20. Some 15,000 National Guard members are being deployed to Washington, D.C. as a result.

With the House debating an impeachment resolution against Trump for rhetoric and falsehoods he spread about Biden’s election victory, other security measures were also put in place for lawmakers.

House members for the first time were required to go through a metal detector before being allowed to enter the chamber, something that will stay in effect every day the House is in session for the foreseeable future, according to a directive by Timothy Blodgett, the acting House sergeant-at-arms.

Blodgett replaced the longtime sergeant-at-arms who resigned after widespread criticism about poor security planning for the Jan. 6 certification vote.

Members of Congress have previously enjoyed nearly free roam at the Capitol, able to bypass security screening stations at most entrances to the building. In the House chamber, there have been Capitol Police officers and civilian door monitors but no screening stations.

Blodgett also told lawmakers they must wear masks during the COVID-19 crisis and that they face removal from the chamber if they fail to do so.

As the Democratic lawmakers gathered to build the case that Trump violated his oath to protect and defend U.S. democracy, a small but significant number of Republican leaders and lawmakers also broke with the party to join the impeachment effort.

"To allow the President of the United States to incite this attack without consequence is a direct threat to the future of democracy, " one of the GOP lawmakers, Rep. John Katko of New York, said in a statement. "For that reason, I cannot sit by without taking action. I will vote to impeach this President."

Minutes before his supporters stormed the Capitol, Trump encouraged them to march on the seat of the nation’s government where lawmakers were tallying Electoral College votes affirming Biden’s victory. Trump, for months, had also spread false claims that the November election was fraudulent, despite his own administration’s findings to the contrary.

As rioters were still in the Capitol, Trump released a video seemingly excusing the events, saying of the rioters: "We love you. You’re very special."

A Capitol police officer died from injuries suffered in the riot, and police shot and killed a woman during the siege. Three other people died in what authorities said were medical emergencies. Lawmakers had to scramble for safety and hide as rioters took control of the Capitol and delayed by hours the last step in finalizing Biden's victory.

Speaking to reporters before traveling to Texas on Tuesday, President Donald Trump said his remarks to supporters at a rally prior to the violent siege on the US Capitol were totally appropriate.

In his first public appearance since Jan. 6, Trump on Tuesday took no responsibility for the siege, suggesting it was the drive to oust him rather than his actions around the bloody riot that was dividing the country.

The outgoing president offered no condolences for those dead or injured, only saying, "I want no violence."