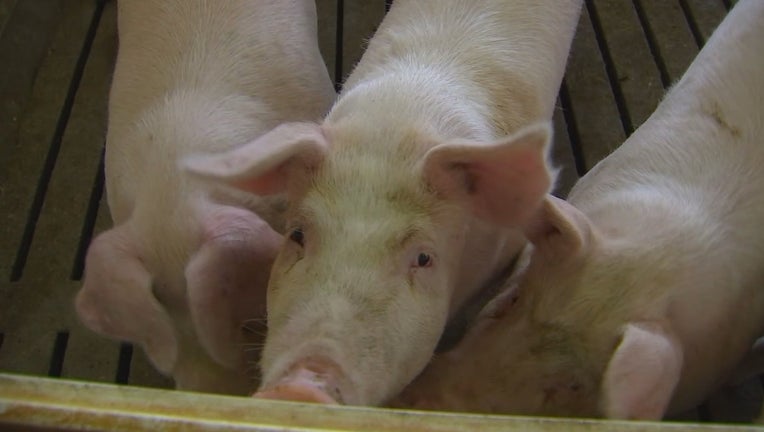 Dave Woestehoff has 1,700 hogs ready to go to market, but with plants closed due to COVID-19, he has nowhere to sell them. (FOX 9)

BELLE PLAINE, Minn. (FOX 9) - A fifth-generation farmer near Belle Plaine, Minnesota is worried about the future of his hog farm and is hoping to sell his hogs any way he can.

“I would love it if I could sell these pigs direct to somebody to use them in their homes at a reasonable price,” said Dave Woestehoff.

A fifth-generation farmer near Belle Plaine is worried about the future of his hog farm and is hoping to sell his hogs any way he can.

His two hog barns are part of a family farm dating back to 1856.

“Have the original deed signed by Abraham Lincoln, so we were here before Minnesota became a state in 1858,” said Dave Woestehoff.

Now, he says he’s losing sleep over losing money by the day.

“But I will tell you this when you lay your head on the pillow at night, every time you roll over you wake up because you’re worrying about it,” he said.

Right now, he’s got 1,700 hogs ready to go to market with with no market to go to and as the hogs gain weight over 300 pounds, their price goes down. They’ve changed the feed to slow down the growth.

“Because usually a pig gains about two pounds a day,” said Dan Glisczinksi, the herd manager. “We’re trying to cut that to a pound a day or even a little less with these soy hulls, but you can only feed that for so long.”

Even with an order to open meat processing plants, it’s doubtful they will open to full capacity and the company-owned pigs will be first in line.

“In Sioux Falls, the plant we take them to, they’re already getting docked when they’re over some certain weight and they’re already pushing that weight,” said Chris Woestehoff, Dave’s son.

They figure in another two weeks, many of these hogs will be too big to sell.

“They’re not going to open up,” said Chris Woestehoff. “They won’t open up in two weeks. We can be hopeful but it’s not going to happen.”

So Dave can’t help but think of every passing car on Highway 169, which passes by the farm, as a potential hog buyer because he’s got nowhere else to sell his hogs right now and nowhere else to process them.

“But the challenge is all the local butcher shops are out two months to get the pigs in and I’ve got to do something quicker, so if there’s deer hunters out there who know how to cut up a deer, I’d love to sell them a pig!” said Dave Woestehoff.

He’s hoping not to euthanize what’s in these barns and he’s hoping, too, for many more generations in Belle Plaine.

The family has now launched a Facebook page for those that may be interested in buying a pig.