WWII vet thanks nurses who treated Him for COVID-19

A 99-year-old WWII veteran who survived three years as a prisoner of war recently left a U.K. hospital after recovering from COVID-19.

A 99-year-old WWII veteran who survived three years as a prisoner of war recently left a U.K. hospital after recovering from COVID-19.

Albert Chambers can now look forward to his 100th birthday in July as he told the nursing staff who helped him beat the deadly virus, “There’s nothing I can say but thank you very much,” in a video posted by the U.K.’s National Health Service.

Chambers’ grandson, Stephen Gater, was so thankful for the support his grandfather received but was not surprised.

“My grandad is amazing. He’s pretty incredible. He’s not only survived the war and being in prison camp, now he’s won the battle with coronavirus,” Gater told the Rotherham Doncaster and South Humber NHS Foundation.A few weeks before he began to show symptoms of COVID-19, Gater said Chambers had fallen at his home when his neighbor found him with a broken arm.

As his symptoms worsened, he was put on oxygen, but his grandson said it was the strawberry trifles that helped him through “the good and the tough times,” according to the NHS. 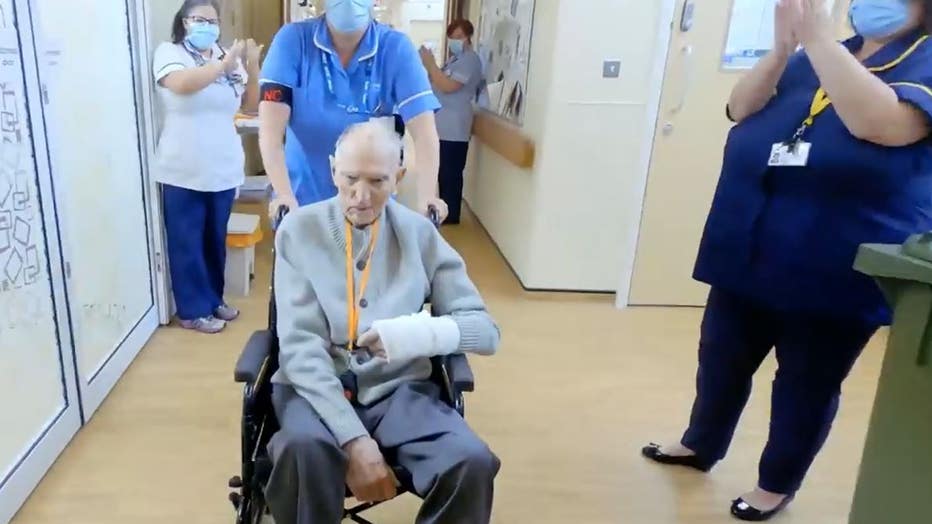 “When I get home I’m going to tell all of my neighbors how marvelous the nurses are here. I want to say, ‘Thank you very much,’ to them. I appreciate every bit of what they have done for me. They couldn’t have been any better. I’ve been well kept and well looked after,” said a grateful Chambers.

Chambers’ family, as well as the hospital staff, were all relieved to see his swift recovery. NHS reported that Chambers had sustained a leg wound during WWII, of which he simply said, “I survived that.”