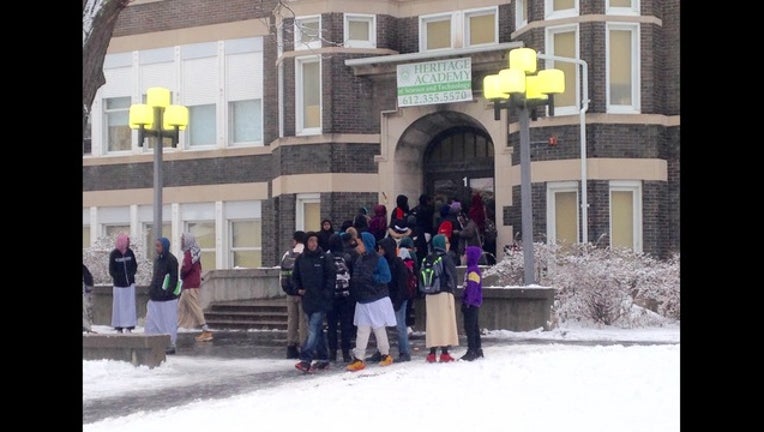 MINNEAPOLIS (KMSP) - Several dozen students walked out of class at Heritage Academy on Friday morning to protest the firing of a teacher who they say was an advocate for Somali-American students.

"There was an incident at Heritage Academy this morning where a number of students stood in front of the building to protest the termination of an associate educator and other concerns related to the transition underway at the school," Minneapolis Public Schools said in a statement. "The students were invited back into the building to engage in a discussion with Leslie Lewandowski, Director of Contract Alternative Schools. The students then returned to class. Abdihafid Maxamed, the associate educator who was at least in part the subject of the protest, was terminated for making false statements related to concerns of inappropriate interactions with students. The safety and well-being of our students is always our first priority."

Heritage Academy, comprised almost entirely of Somali-American students, was taken over by Minneapolis Public Schools in November. In a letter to students, the interim superintendent said, "Many of you expressed concerns about student safety and governance. We share those concerns and decided to step in."

Upset with the takeover, Heritage Academy's board sued Minneapolis Public Schools, citing a threat to the "educational program and mission of the school."