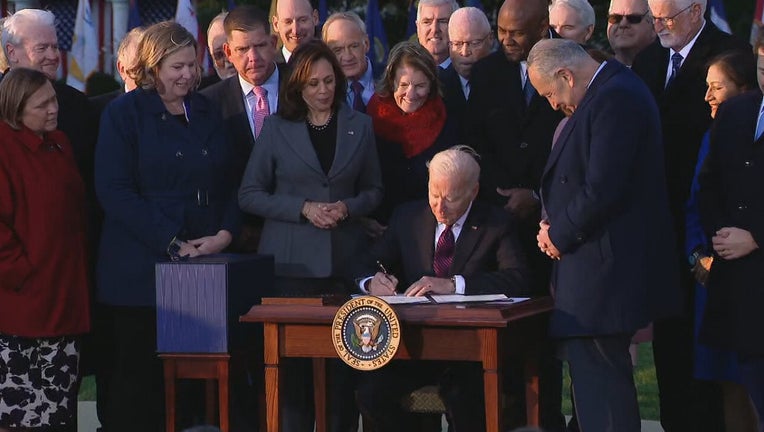 (FOX 9) - Minnesota stands to get at least $6 billion from the infrastructure package that President Joe Biden signed into law Monday, though wrapping your head around its impact is a complicated task.

Biden said the $1.2 trillion deal was proof that bipartisanship is alive -- though no GOP members of Minnesota's congressional delegation voted for it -- and promised Americans the law will "change your life for the better."

Here comes the infrastructure money: Minnesota set to receive at least $6B

Minnesota stands to get at least $6 billion from the infrastructure package that President Joe Biden signed into law Monday, though wrapping your head around its impact is a complicated task.

He linked the infrastructure breakthrough to a larger package of childcare, workforce, and climate initiatives that congressional Democrats have failed to pass, saying he was "confident" it will succeed. Speaker Nancy Pelosi said the House will "hopefully" vote on the $1.85 trillion climate and childcare bill this week.

But, for now, it's all about infrastructure. Minnesota transportation officials and key lawmakers on the House and Senate transportation committees will have significant influence over how the money gets spent.

Some of Minnesota's billions will be for projects already in the works. The rest of it is new money, which Transportation Commissioner Margaret Anderson Kelliher said last week "goes a long way to help us to close a number of the gaps" in road and bridge funding.

Minnesota will get $4.8 billion for roads and bridges, $818 million for mass transit, $100 million for rural broadband internet, and $68 million for electric vehicle charging stations, the White House has said. Those are estimates that could change depending on how federal officials create new programs under the new infrastructure law.

The law also creates competitive programs for additional funding. For example, there's a $1 billion program for neighborhoods across the U.S. that have been divided by the interstate highway system.

U.S. Transportation Secretary Pete Buttigieg suggested Monday that a proposed land cap over Interstate 94 in St. Paul's Rondo neighborhood would be in the running for funding. Supporters of the cap want to build a neighborhood over a section of I-94, reconnecting the community that existed prior to the freeway's construction.

"I’ve heard a lot about the Rondo neighborhood and areas where we should be paying attention to how federal dollars can help remedy problems created by federal dollars in the past," Buttigieg said in an interview with FOX 9. "We have to be mindful of the cost that was created by having some of these communities divided in the first place, and we should remember the economic opportunities we’re going to unlock here."

The Rondo project got $6.2 million from state lawmakers in June for project design work, but supporters have long appealed to the federal government as the key piece.

It's not clear that the infrastructure law can quickly ease supply chain issues that are causing higher prices for many goods in time for the holiday shopping season.

"I just view this really practically. We know we’re behind on infrastructure, behind the rest of the world," Klobuchar said in an interview. "We also know that there’s supply chain problems and we don’t have enough workers – particularly in Minnesota – for some of our jobs. So, let’s fix this instead of blaming each other. This bill is the beginning of that."