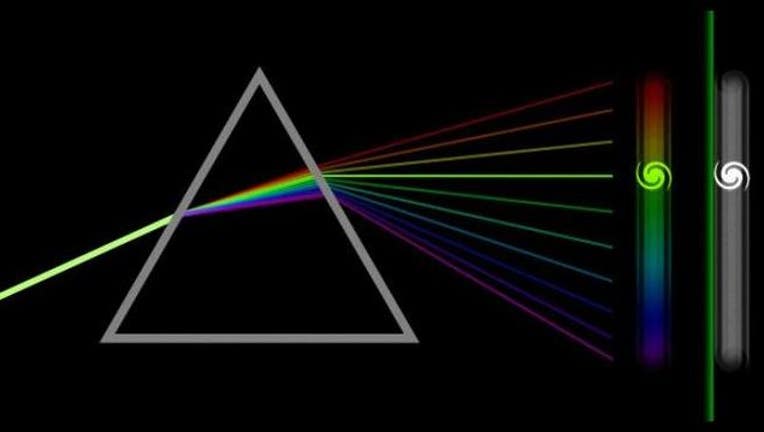 White light from a galaxy going through a prism gets decomposed into all its colors just like a rainbow. At each color, we have an image of the galaxy. Photo courtesy of the University of Minnesota.

MINNEAPOLIS (KMSP) - Astronomers at the University of Minnesota are calling on the public to help them find “baby” galaxies that are giving birth to new stars.

The project, named “Galaxy Nurseries," aims to discover thousands of new baby galaxies in the universe using the light they emitted when the universe was only half its age, according to a university news release.

Volunteers are needed to examine and classify more than 10,000 images of the sky from the Hubble Space Telescope. The project is powered by Zooniverse, the world’s largest and most popular people-powered research platform.

Researchers find galaxies by identifying features called “emission lines” in galaxy spectra. They use an algorithm to identify the lines in the images, but it often detects lines that are not actually galaxies.

“With help from Zooniverse volunteers, the researchers can eliminate the false positives and find galaxies that are some of the youngest and smallest that have ever been discovered,” the U said in a statement.

The astronomers at the U are hoping that with the public’s help, they can complete the project in 100 hours. Without volunteers, the project would have taken the research team a year to complete.

Get involved with the Galaxy Nurseries project here.