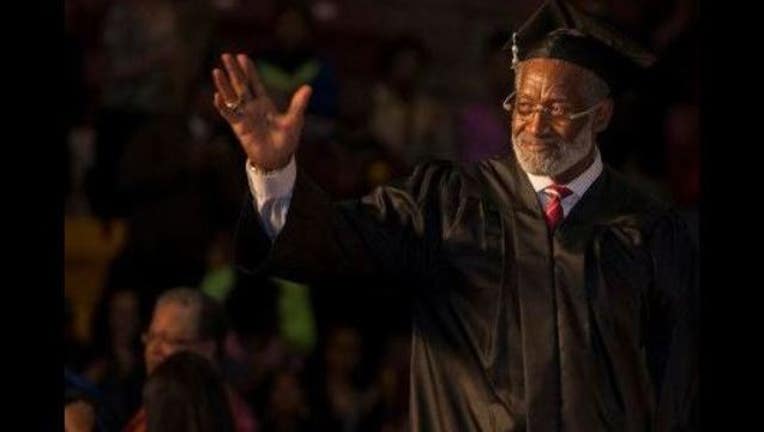 Hallof Famer Bobby Bell, 74, graduated from the University of Minnesota last week, fulfilling a promise he made to his father when he left home at 18. The MMQB asked the former Gopher football player and Super Bowl champion to write a graduation speech and impart wisdom to his classmates.

I know I'm different than most of you. I'm 74 years old! Between 1959, when I enrolled at the University of Minnesota, and this spring, when I completed my diploma, I've lived a pretty extraordinary life. I've won the Rose Bowl, earned a Super Bowl ring and have been inducted into the Pro Football Hall Of Fame as well as several College Halls of Fame. I've had my number 78 retired with the Kansas City Chiefs and the University of Minnesota, worked for General Motors, opened five restaurants, shook hands with John F. Kennedy, appeared on The Tonight Show—with Johnny Carson, I hope you know who he is!—and I've had the good fortune to travel around the world.

However, one thing was always missing. I have rooms full of plaques and trophies, but I did not have my college diploma. When I was 18 and left my home in Shelby, N.C., I told my father I would complete my education. When I was declared for the 1963 AFL draft, I was 17 credits shy of completing my degree. Then football happened, and life happened, and I never went back. My father died, and my mother died, and every year I told myself, "This is the year."

Finally, I decided I couldn't put it off any longer. Life is too short. The University of Minnesota dug up my handwritten transcripts and worked with me to figure out a plan. It was going to be difficult, but hey, I've done some difficult things in my life.

I took courses online so I could stay home in Kansas City. I told my professors and the students in the course not to tell anybody I was back getting a degree. I didn't want to call attention to myself, as I needed to focus on the task at hand, which was my homework. This was something I was doing for myself, and for my father. When I walked across the stage May 14, I thought to myself, Dad, it might be a little late, but I did it.

To the Class of 2015, I hope you'll allow me the opportunity to impart a little wisdom that I've picked up along the way. Much of it comes from lessons passed down by my father, and some of it I have picked up through my career. All of it, I hope, can help you as you embark on your life journeys. I know they can be as wonderful and as fulfilling as mine.

You have a degree now. Remember, nobody can take that away from you.

There's a reason education was so important to my father. He didn't get to go to school like everyone else. He never graduated high school. We grew up in segregated times, when we drank from different water fountains and ate at different restaurants. Everyone who owned the mills, anyone who did anything of importance around here, sent their kids off to school.

My dad said the only way to compete with the kids who could go to big colleges, the only way to be on common ground with everyone, is to get an education. While there were many schools that wouldn't let me play football because I was black, Minnesota gave me a chance. But I understood that it was just a game. You could be the best football player, or the best basketball player, or the best baseball player, but if something happens to you, what are you going to do? If you don't have a degree to fall back on, you just have memories that can't help you in the future.

Education empowers you. And no matter what you do in life, your education is something that nobody can take away from you.

When I started my degree up again, it was very different than it was in 1959. Everything was based on technology. Back when I went to school, we went to the library to do research and look things up. Now I was asked to make Power Points as my homework assignments. The problem was, I didn't know how to create them—how to make all the slides, and time it to make sure it was all under eight minutes, which was the requirement. I asked my son. He helped me with the laptop, and he knew a little bit about Power Points, but not enough. So I called up a lady I know who works with the Kansas City Chiefs, my old team for 12 seasons.

So I went down to the Kansas City Chiefs offices and had her show me. Sometimes it's humbling to ask for help, but it will help you in the long run. Growing up, I would sometimes tell my father, "I don't want to ask you a stupid question. Maybe I should know it and I don't want to ask."

My dad would always say, "Boy, ask me the stupid question. Because maybe I can resolve that now before you do anything stupid."

Growing up, I always thought we were rich. We had food on the table, clean clothes, and a roof over our head, so what more could I need? As I went on in life, I realized how hard my parents had to work for those things. My mother and my father worked so hard to provide for us, and they had to continue working hard to make sure we could maintain that lifestyle.

I took that to the NFL. I always had a full-time job in the offseason, working for General Motors. People always asked me, Why? Well, football can be taken away at any moment. Guys playing now make so much money now, it becomes the most important thing. Their education ends up on the bottom of their "bucket list."

They think there's no end to the rainbow and that they have it made. They won't go back to school because they think football can carry them on forever.

I hope they realize that's a risky way to live. If you want to provide for your family, for years to come, there's always work to be done, and more you can do.

You live in a glass house.

That's something my father always said to me. When I went to Minnesota, the state was less than 2 percent black. I was one of only five black members on the football team. There was a lot of pressure for me to do well there, to prove that the coach didn't make a mistake using a scholarship on me. I knew I didn't want to go back to North Carolina, because that would let my father down, let my mother down, let my brothers and my sisters down.

There were people who expected me to fail and I had to work extra hard to make sure I didn't. I wasn't the smartest kid, so I had to study hard. I went to study hall and the library and asked people to help me out along the way. I also had to make sure I was doing the right things and making the right decisions. Every time I walked down the street, somebody was watching my move, waiting for me to mess up.

You may not be in a similar situation, but remember that everything you do is being watched and maybe judged. It's even worse now because everyone has a cell phone in their pocket and what you do can live on forever.

Stay true to your word.

Before I left for Minnesota, my father gave me a present. It was a gold Bulova watch. He said, "Boy, I want you to be on time. You need a good watch."

That watch has become a symbol for me—a symbol of everything my father stood for, and everything I promised him. When I walked across the stage to get my degree, I had that watch on my wrist. I looked at it, and it reminded me of him. I might not have actually been on time getting my degree, but I stayed true to my word.

And I can't tell you how good that feels.