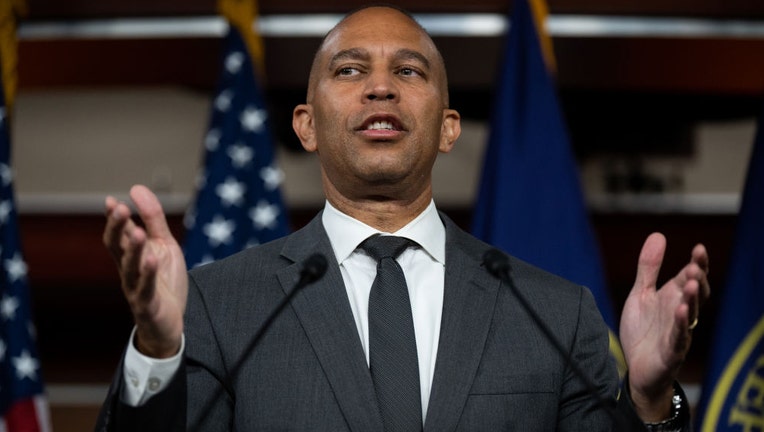 WASHINGTON - The day after Speaker Nancy Pelosi announced she would step aside, Rep. Hakeem Jeffries of New York announced his own history-making bid Friday to become the first Black American to helm a major U.S. political party in Congress as leader of the House Democrats.

The 52-year-old Jeffries gave nod to the "legendary figures" before him, Pelosi and her leadership team, while encouraging his colleagues to embrace this "once-in-a-generation opportunity to further unleash our full potential as a team."

Jeffries vowed to create an inclusive leadership that draws on all members of the diverse Democratic caucus as the party works back toward majority status in the House after Republicans seized control in the midterm elections.

RELATED: Pelosi to step down from Democratic leadership, will continue serving in Congress

"The House Democratic Caucus is the most authentic representation of the gorgeous mosaic of the American people," Jeffries said in a letter to colleagues.

"I write to humbly ask for your support for the position of House Democratic Leader as we once again prepare to meet the moment."

The new generation wasted no time preparing to take their place after Pelosi's expected, but still sudden, announcement Thursday she would relinquish her position after 20 years leading the House Democrats.

It's not just Jeffries, but Rep. Katherine Clark of Massachusetts and Rep. Pete Aguilar of California — who have worked together as a lower-rung leadership team — all swiftly wrote to colleagues with their bids for the first, second- and third-ranking positions in House Democratic leadership.

The trio has been working in tandem for years, preparing for just this moment, seeking to engineer a smooth transition when Pelosi and the other top two Democrats Majority Leader Steny Hoyer and Democratic Whip James Clyburn of South Carolina step aside.

House Democrats will meet behind closed doors as a caucus in two weeks, after the Thanksgiving holiday, to select their members. So far, Jeffries, Clark and Aguilar have no stated challengers.

Pelosi told reporters she would not be making any endorsements, believing it's better not to "anoint" new leaders but allow them the confidence of rising on their own. But on Friday, she heartily backed the potential new leaders.

"With pride, gratitude and confidence in their abilities that I salute Chairman Hakeem Jeffries, Assistant Speaker Katherine Clark and Vice Chairman Pete Aguilar for being ready and willing to assume this awesome responsibility," Pelosi said in her own statement Friday.