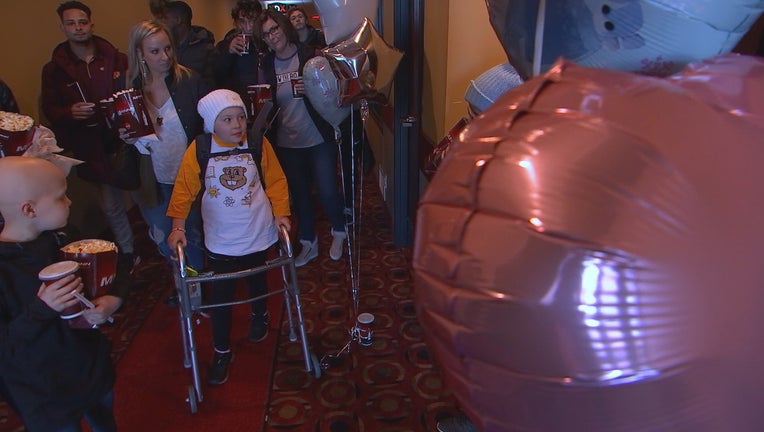 PLYMOUTH, Minn. (FOX 9) - Before 9-year-old Megan Wagner starts her second round of chemotherapy to fight against Osteosarcoma, she hosted a “movie party” with the Minnesota Gopher Football team, an organization that’s come out in big numbers to support her.

“I’m really excited for this so I’m keeping my mind on the movie thing and not on surgery,” Megan said.

Before 9-year-old Megan Wagner starts her second round of chemotherapy to fight against Osteosarcoma, she hosted a “movie party” with the Minnesota Gopher Football team, an organization that’s come out in big numbers to support her.

Next week Megan will undergo surgery to remove part of a tumor on her leg. After that, she’ll start her second go-around with chemotherapy at M Health Fairview University of Minnesota Masonic Children’s Hospital.

“We’re going to have a movie party for the Gopher players and the coaches and almost everyone,” Megan said.

Megan’s family planned a “movie party” at the Mann Theater in Plymouth where Megan got to invite around 80 of her closes friends to watch Frozen II together before she heads back to the hospital. More than sixty players, Coach PJ Fleck, his wife Heather, player Casey O’Brien and some of Megan’s friends from the hospital came to show her support.

The Gopher Football Organization has formed a special bond with Megan. Players and coaches visit her in the hospital.

“She’s already done it once before and she shows what it’s like to row the boat and use our culture to beat cancer and she’s going to do it again,” O’Brian said.

O’Brien says his teammates’ support for Megan and other kids battling illnesses shows how much the team cares about community and using their role as players to inspire others.

“It’s really cool that we mean that much to her and we can bring her joy like that,” O’Brien said.

Megan’s mom, Andera, says it’s overwhelming to see how much the team is willing to support her daughter and she says it shows the organization’s commitment to helping others.

“It means the world. She’s been given a really tough hand and to have to face cancer for a second time so quickly and to see that all of these people are here to support her and root her on is incredible,” Andrea Wanger said.

Before the movie started, Megan stood in front of the packed theater and thanked her friends, family and the Gopher Football Team for being on her team.

“Casey, thank you for showing me how to fight cancer with a smile on my face. If you can do it, I can do it,” Megan said.

The Mann Theater in Plymouth donated the theater space. The company is working with Megan’s mom to hold a fundraiser where ticket sales will go towards pediatric cancer research.

Megan has started her own fundraiser called Reading for Research, where people pledge money to cancer research for every page or book kids read.