GLENDALE, Ariz. - The Glendale Municipal Airport is busy preparing to welcome hundreds of people as two high-profile events are making their way to the Valley – at the same time

For now, the airport may look quiet, but soon everyone will be arriving as it’s located just two miles west of State Farm Stadium where Super Bowl LVII will be held on Feb. 12.

As the closest airport to State Farm Stadium, Glendale Airport Administrator Matthew Smith was excited to take off with a new challenge. 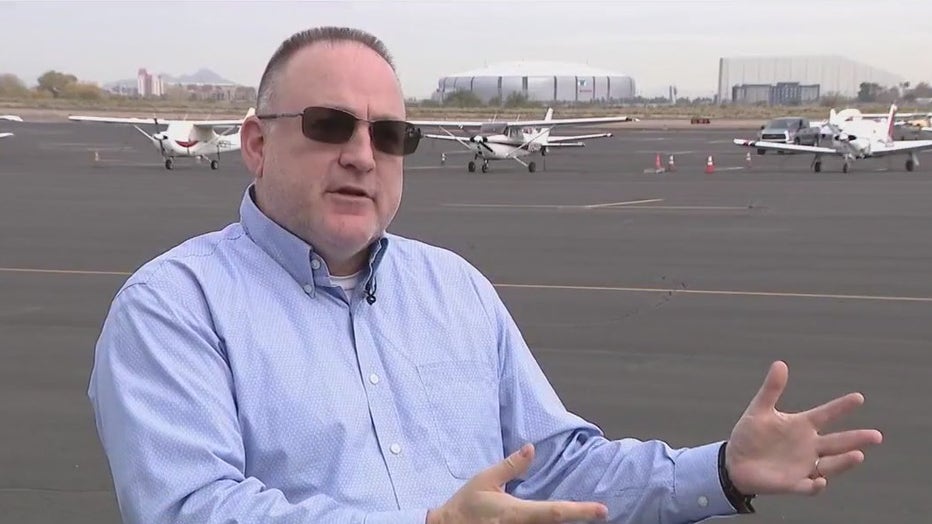 "I just started working at the airport on October 31st, and so I showed up and then everybody said, ‘Well, it’s time for you to plan for the Super Bowl,’ so it’s quite a task. It’s been actually a heck of a lot of fun," Smith said.

Since then, the planning has been non-stop to ensure everything is smooth sailing. That includes repainting the building, redesigning and rebuilding the taxiways to adhere to temporary flight restrictions that will happen on game day.

"About an hour before the game we are going to shut down the airspace, and it’s not just Glendale, it’s the whole Valley … then what will happen is that will kind of guarantee the safety of the people at the game and also give me a chance to turn to the TV on and watch the game and then about an hour after the game is over the flight restrictions will be lifted," Smith explained.

The airport is for general aviation, meaning they welcome private planes only, including VIPs and celebrities. In total, they can take up to 575 planes. So far, they have a few hundred reservations.

"I think what’s happening is people are kind of waiting to see who the teams are and then once we know who the teams are, then we are going to start to see the reservations just explode, and it’s going to be wild," he said.

Not only is it a big boost for the airport, but the entire city of Glendale.

"Somebody is going to come here and spend a fair amount of money to land here and get whisked off to the game, but then they are going to spend an untold amount of money further through the economy," Smith said.

Planes housed at the airport will be temporarily relocated to allow for the newcomers.

During the same weekend, The WM Phoenix Open will be in Scottsdale, which brings thousands of visitors to the Valley.

As prep works get underway to get Margaret T. Hance Park ready for the Super Bowl Experience, people living near the park are weighing in on the potential negative impacts from the event. FOX 10's Irene Snyder reports.

With the Super Bowl getting close, marijuana dispensaries in the Phoenix area are hoping to cash in on businesses from the big game. To prepare, one dispensary is hiring for all kinds of positions.

Super Bowl 2023: Restaurants in the Phoenix area get ready for big weekend

With about a month left before the Super Bowl, restaurants near where the game will be played and elsewhere are getting ready for what is shaping up to be a very important weekend, with many people visiting Arizona from other states. FOX 10's Irene Snyder reports.