Flooding was seen in the town of Apalachicola, Florida, in footage posted to Facebook on Aug. 16, as Tropical Storm Fred hit the area. (Credit: Jay Strahan via Storyful)

Tropical Storm Fred weakened to a depression and spawned several apparent tornadoes in Georgia on Tuesday as it dumped heavy rains into the Appalachian mountains along a path that could cause flash floods as far north as upstate New York.

One death was reported — a Las Vegas man whose car hydroplaned near Panama City, Florida, Monday night and overturned into a water-filled ditch, the Florida Highway Patrol said.

Fewer than 30,000 customers were without power in Florida and Georgia after the storm crashed ashore late Monday afternoon near Cape San Blas in the Florida Panhandle. Emergency crews were repairing downed power lines and clearing toppled trees in Fred's aftermath. Some schools and colleges in Florida, Alabama and Georgia cancelled Tuesday's in-person classes due to the storm.

The National Hurricane Center said Fred had top sustained winds of 35 mph (56 kph) as it crossed southeast Alabama into western and north Georgia. Senior hurricane specialist Stacy Stewart said Tuesday that it could dump 5 to 7 inches (13-18 centimeters) of rain into parts of Alabama, Georgia and the Carolinas — and possibly up to 10 (25 centimeters) of rain in isolated spots, causing flash flooding in mountainous areas. 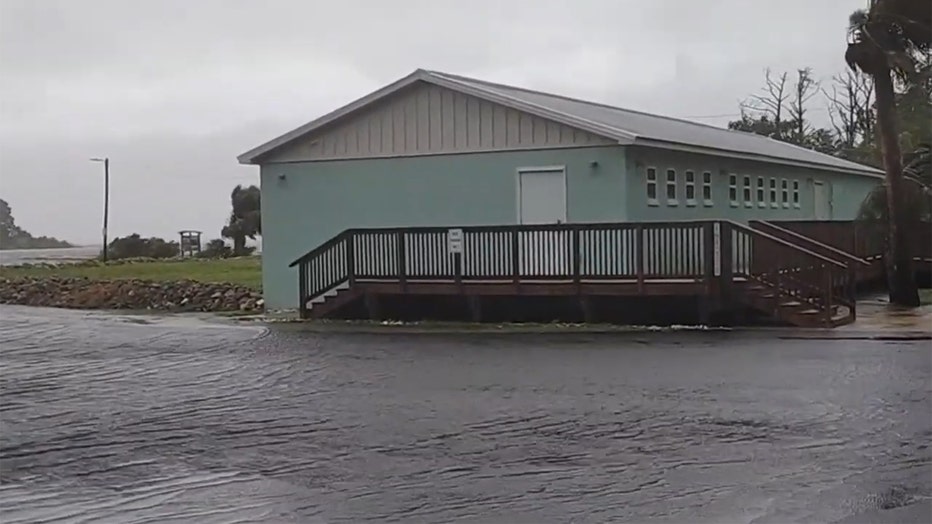 RELATED: Haiti braces for Tropical Storm Grace as Florida picks up after Fred

At least three apparent tornadoes touched down in Georgia: One hit Americus, in the southwestern part of the state, one hit a rural area of Meriwether County, between Atlanta and Columbus, and one hit Jeffersonville, near Macon, according to the National Weather Service.

The storm hit Americus around 1:30 a.m., knocking over trees, with some falling on houses, and downing power lines, WRBL-TV reported.

An Academy Sports warehouse near Jeffersonville was hit by another likely tornado before 6 a.m., with metal siding torn off the building, a semitruck trailer tipped over and Twiggs County Sheriff Darren Mitchum telling WMAZ-TV that eight boats were scattered around by the storm. Weather officials warned of a tornado in the Jeffersonville area as well.

Heavy rains drenched parts of metro Atlanta just before dawn Tuesday, snarling commutes. About 2 inches of rain was recorded in Atlanta and Macon, with more than an inch falling overnight in Augusta and Columbus.

Grace's sustained winds grew to 45 mph (75 kph) as it left Haiti on a westward path between southeastern Cuba and Jamaica. Forecasters said it could be near hurricane strength as it approaches Mexico’s Yucatan peninsula late Wednesday or early Thursday.

Tropical Storm Henri, meanwhile, was about 135 miles (215 kilometers) south-southeast of Bermuda. The small tropical cyclone had 50 mph (80 kph) winds and was expected to circle widely around the island, the hurricane center said.