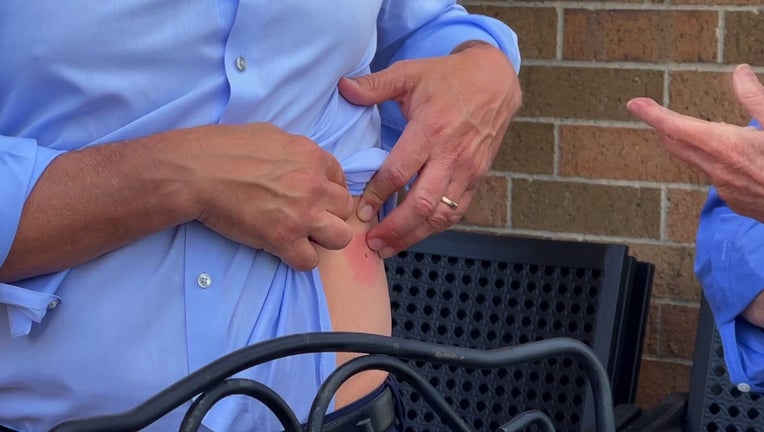 Rob Olson shares his experience after a tick bite. (FOX 9)

(FOX 9) - I write this as a first-person account, simply hoping it’s helpful. Lyme Disease is relatively rare, but with more than a thousand lab-confirmed or clinically diagnosed cases in Minnesota each year, and a few thousand more cases where it’s suspected, it’s prevalent enough to be aware of. If not caught early, the health consequences can be rough.

I found the tick on Saturday afternoon almost by accident. A strange bump on my left side as I was getting ready to go to my younger son’s high school commencement. After a good 10 minutes of carefully pulling, it finally came free. It looked a little different from a typical wood tick, so I put it in a baggie just in case. But in a hurry to get out the door, I never took the time to try to identify it.

Minnesota summer: Be on the lookout for ticks

As weather warms Minnesotans continue to head outdoors, but when they do will have to deal with ticks as well.

But I kept an eye on the place I found it, though not really expecting to see anything. Then, on Wednesday evening, I took a look and knew there was a problem. Suddenly, around the mark where I found the tick, a 2-inch diameter red rash had sprung up. I immediately went to urgent care.

At the urgent care facility, the doctor took one look at the rash and told me it had the signature look of Lyme disease. By this time, it had grown even redder and had developed the beginnings of the classic bull's-eye mark that signals a Lyme Disease infection. I asked him how rare this was. He said it’s more common than you’d think, that they’d seen a number of these in the past few weeks.

Lyme disease is carried by the black-legged tick, also known as the deer tick. The one I saved was hard to identify since it had some marks that look like a wood tick, which does not carry Lyme, but it has black legs, which wood ticks do not have.

The last public data on Lyme disease posted by the Minnesota Department of Health is from 2018. That year, there were 950 lab-confirmed cases and 591 probable cases, in which it’s diagnosed just by the rash itself, which is what my case is. Those numbers are fairly typical, says Schiffman. But Lyme disease is suspected each year in several thousand more cases based on symptoms, but with no way to confirm it any further.

I was immediately prescribed Doxycycline, an antibiotic. And already a day later, the rash was getting lighter and had not grown. I showed it to Dr. Frank Rhame, an infectious disease specialist at Allina Health.

"They were spreading out from that spot," he told me, referring to the bacteria, explaining the rash faded because the bacteria were being killed by the first dose of antibiotic.

Immediate treatment with antibiotics drastically reduces the chances of long-term complications. Those who suffer from more severe problems, such as facial nerve paralysis or joint swelling and pain, likely never realized they had a tick bite, never seeing the tick or the rash. In some cases, the telltale rash never appears.

Immediate antibiotic treatment "provides a great reduction in the possibility you have any complications, but you can never get me to say 100%," said Dr. Rhame. "100% doesn’t really work in medicine."

Dr. Rhame says it’s worth knowing how to prevent deer tick exposure to begin with, avoiding tall grasses in the spring and summer, and wearing repellent when you’re out.

And the sooner you remove a deer tick, the better. It takes anywhere from 12 to 36 hours for an infected tick to pass the bacteria. That means I did not even notice a tick attached to the lower left side of my stomach for probably a day. Lyme disease is serious, but it takes a perfect combination of events.

"Ticks have to find you, they have to attach to you," said Schiffman. "They have to be on you long enough in order for you to actually get sick."