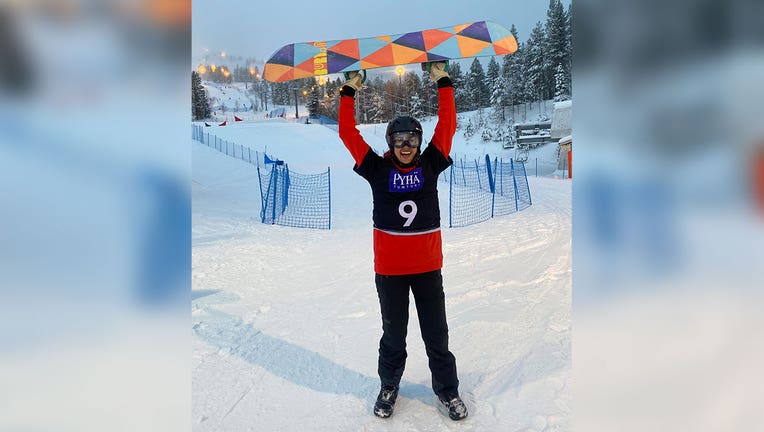 MINNEAPOLIS, Minn. (FOX 9) - In November, FOX 9 reporter Courtney Godfrey took a leave of absence to pursue professional snowboarding and after several competitions she’s inching closer to a spot on the U.S. Paralympic Team competing in Beijing this March.

In 2017, Courtney lost the bottom half of one of her legs in a boating accident. Since then, she’s become an advocate for amputees and quickly got back to doing the sport she loves: snowboarding.

FOX 9 reporter Courtney Godfrey gave an update Tuesday on her progress towards competing in the Paralympics.

Even though she had never snowboarded competitively or participated in snowboard racing, she says in August a coach reached out to her suggesting she look into professional snowboard racing. Her initial response was that she was too busy with work and being a mom and felt any chance she had to compete already passed. But, with support from her family, she decided to go for it and made plans to go to Europe by the end of the year and start competing.

"I showed up in Europe with no racing experience, just a love for snowboarding. I loved to snowboard before my accident and I still love to snowboard today but I had never raced before," she said.

Her first competition was in the Netherlands. Courtney says her first race was a bit shocking and made her question her decision to put her life on hold to pursue this dream.

"I had placed second to last and I’m like ‘what am I doing here?’ I left a great career, I left my kid at home, I’m in way over my head. What have I done?" she said.

With more training and a better understanding of what the competition was like, in her next race in Finland, Courtney won a race and took home a Europa Cup first place. After more success in Austria she was moved up to the professional, World Cup category.

"Now I compete on the world upstage against the best para snowboarders in the world," Courtney said.

Courtney has not made the U.S. Paralympic Team… yet. To make the team she either has to secure first place wins at her next two competitions or be selected by the coaches.

"I need to prove to the U.S. coaches that I’m making improvements and I can show up in China a real competitor. So that’s what I’m focused on right now," she said.

While getting a spot on the team would fulfill her professional snowboarding dreams, for Courtney, it’s never been about the medals. She says she’s out to show her son and other amputees that a disability doesn’t slow you down or keep you from achieving your goals.

"I would love to take home all the medals but what it’s really about is the other amputees who are watching at home who can see that your life isn’t over after trauma," she said.

Courtney competes in the slalom race, which includes obstacles like turns and requires her to get down the hill as fast as possible. She also competes in snowboard cross, which includes a similar obstacle course but four competitors race at once and are racing to the bottom.