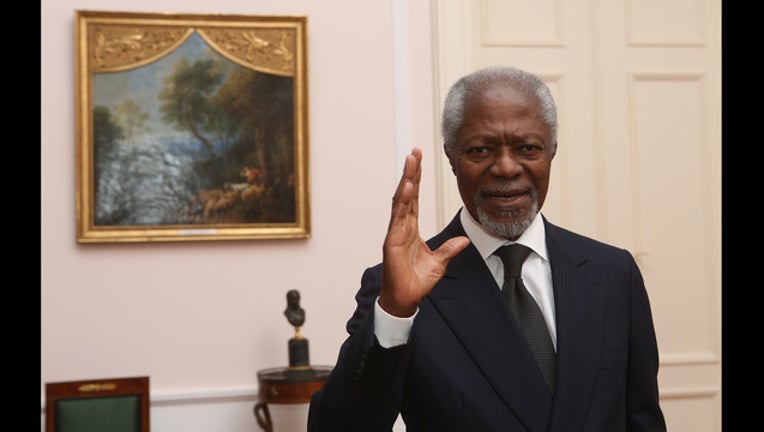 Former Secretary-General of the United Nations Kofi Annan attends a dinner in honor of Former German President Horst Koehler on March 8, 2018 in Berlin, Germany. Koehler was president of Germany from 2004 to 2010. (Photo by Adam Berry/Getty Images)

(AP) - The West African nation of Ghana on Saturday mourned Kofi Annan, the grandson of tribal chiefs who became the first black African to assume the world's top diplomatic post.

President Nana Akufo-Addo ordered flags to fly at half-mast for a week while trying to reassure the country's 28 million people that the former U.N. secretary-general and Nobel Peace Prize winner left the world without pain.

"I am comforted ... that he died peacefully in his sleep," the president said on Twitter after speaking with Annan's wife. "Rest in perfect peace, Kofi. You have earned it."

The normally vibrant streets of the capital, Accra, were somber after initial disbelief from some residents dismissing Annan's death as fake news.

"It was a great shock to hear this news," former President John Kufuor told The Associated Press. He said Annan had continued to visit Ghana about three times a year and if there were any invitations he honored them.

"Grandpa used to tell us a lot about how he was such a nice person," said Kojo Manu, a mechanic who said his late grandfather had lived in the same neighborhood with Annan.

"Big man Kofi Annan gave some of us a reason to live and to continue to have faith in our roots as Africans," said Emmanuel Youri, an advertising executive.

"He was a great African by every standard," lawmaker Ras Mubarak said.

Annan was born in the Ashanti heartland two decades before Ghana became the first country in sub-Saharan Africa to gain independence from colonial rule.

The son of a provincial governor, he attended an elite boarding school and became fluent in English, French and several African languages and quickly entered the diplomatic world.

He spent almost his entire professional life in the United Nations, and Africa played a major part of his work. The continent also was the source of one of the greatest failures during his time as U.N. peacekeeping chief, the 1994 genocide in Rwanda in which U.N. peacekeepers failed to save civilians' lives.

Africa's widespread health and development challenges shaped Annan's crafting of what became known as the Millennium Development Goals, and played a central role in creating the Global Fund to Fight AIDS, Tuberculosis and Malaria.

After stepping down as U.N. chief, Annan was still called on to apply his diplomatic skills to some of Africa's biggest crises, either on his own or as chair of The Elders, an elite group of former leaders founded by South Africa's Nelson Mandela.

On Saturday, Kenyan opposition leader Raila Odinga said he had "fond memories" of Annan because he stepped in to save the country from civil war after a flawed presidential election in 2007 that led to more than 1,000 deaths. Annan brokered a power-sharing deal to calm tensions.

Annan's last major public appearance in Africa was last month in Zimbabwe on the brink of a historic presidential election, the first without longtime leader Robert Mugabe on the ballot.

As Annan urged Zimbabweans to vote peacefully and met with the country's leaders, he struggled to walk and coughed from time to time, with his aides closely following behind.

"Annan's origin and home will always be traced to Ghana, but his exceptional leadership roles, humanitarian spirit and contributions to global peace and development will remain indelible in the history of the entire world," Nigerian President Muhammadu Buhari said Saturday.