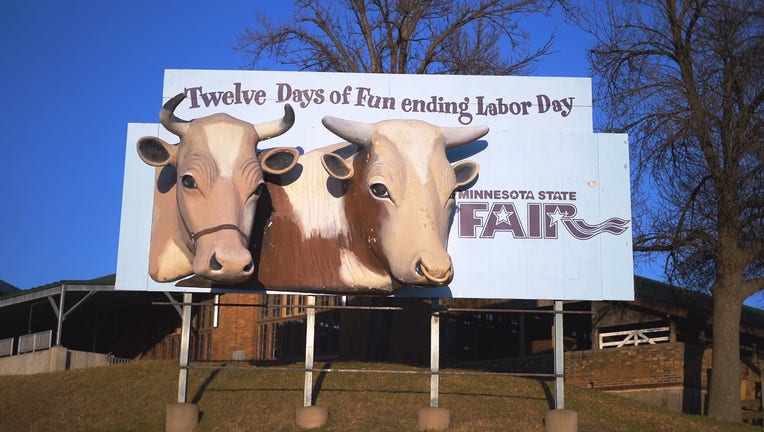 MINNEAPOLIS (FOX 9) - More than a century before food delivery services like Bite Squad and GrubHub, for four generations, a family-owned business cornered the market on delivering dairy products door-to-door in the Twin Cities.

On the southwest corner of the Minnesota State Fairgrounds, there’s a billboard overlooking Como Avenue, welcoming visitors to the 12 best days of summer. Long before their cows found a home at the Great Minnesota Get-Together, they were a famous fixture at a family run creamery in the North Minneapolis.

On the southwest corner of the Minnesota State Fairgrounds, there’s a billboard overlooking Como Avenue, welcoming visitors to the 12 best days of summer. Long before their cows found a home at the Great Minnesota Get-Together, they were a famous fixture at a family run creamery in the North Minneapolis.

“That helped put the dairy on the map,” said Bill Ewald, whose great grandfather founded Ewald Brothers Dairy. “It was instant identity with Ewald Brothers.”

Ewald knows a thing or two about the dairy business. You could even say milk in in his family’s blood. His great grandpa, Chris Ewald, immigrated from Denmark in 1884 and went to work helping out on a milk delivery route to help support his widowed mother and four siblings.

Two years later, he’d saved enough to buy the route and started an enterprise that would last the next 100 years.

“Ewald became the largest home delivery operation supplying to one out of every three homes with 40 other diaries competing against them,” Ewald said.

Chris Ewald’s dream grew from a single horse and a cart operation to one of the largest employers in the city with 350 workers and a fleet of signature bright yellow trucks.

They delivered dairy products to suburbs as far north as Anoka and west to Minnetonka as the area’s sole distributor of Golden Guernsey milk, which had a slightly amber hue because of its high amount of butter fat.

“Another Hallmark of Ewalds was we were the first dairy to have uniformed milkmen. So they would show up in beautifully pinstriped uniforms and sharp hats, white shirts and black ties,” Ewald recalled.

What really made the Ewald brothers stand out were their 3D billboards with the heads of a bull and cow sticking out. There were several, but the one across the street from the company’s headquarters at Golden Valley Road and Xerxes Avenue became a signpost in the area for decades.

“Kids everywhere knew them,” Ewald said. “If they were coming up Broadway or going through Theodore Wirth Park, if they passed the cows, they knew they were this close to grandma’s hosue or wherever they were going in the Cities. They were a beacon for Ewald Brothers.”

After its heyday in the 1950s and 1960s, the consumers changing tastes away from high fat food and towards supermarkets instead of home delivery. It eventually caused dairy’s decline.

Through his collection of memorabilia, Ewald is on a mission to keep this family’s legacy alive.

The dairy may have closed its doors nearly 40 years ago, but its part in the history of the city it used to call home isn’t ready to be put out to pasture just yet.

“Hearing the stories of what those cows have meant to them, just that simple billboard during many trying times brought joy and that’s what warms my heart,” Ewald said.

Ewald wrote a book about his family’s history. Proceeds of the book go to a care center for children with disabilities. There’s also a Facebook page where people can connect with their memories of the dairy and its famous cows.