Not everyone can cut it in the pros playing football. But, after landing a dream job in the NFL, Vikings receiver Blake Proehl is finding success in another tough industry: the music business.

MINNEAPOLIS (FOX 9) - Not everyone can cut it in the pros playing football. But, after landing a dream job in the NFL, Vikings receiver Blake Proehl is finding success in another tough industry: the music business.

When he's not running routes and catching passes for the Vikings, Proehl is singing, writing, and recording, an opportunity that came with an unfortunate setback on the playing field.

A lot of people dream of playing in the NFL but Proehl had family season tickets on the 50 yard line.

"It was crazy, you know, we were on the move kind of you know, in the NFL you can get picked up, traded, cut whenever and he played for 17 years," he explained.

The "he" in that sentence is Blake's dad Ricky Proehl, a Super Bowl-winning receiver who was in the NFL for nearly two decades. Blake's older brother also went pro.

"I mean football, that kind of put food on the table for us," he explained. "So it definitely is in our blood for sure."

In spring 2021, Blake was picked up by Minnesota as an undrafted free agent out of East Carolina. He put his head down and went to work, fighting for a spot on the roster. His first big test would be a couple of months later in a preseason practice with Denver.

"In the beginning of practice we did a one-on-one drill and I just planted wrong in my knee just like took just took everything with it," he recalled.

Blake blew out his knee in four places. Injuries that were not only season-ending, but they were also potentially career-ending. "I think that was probably the hardest couple of months I've had in my life personally," he said. 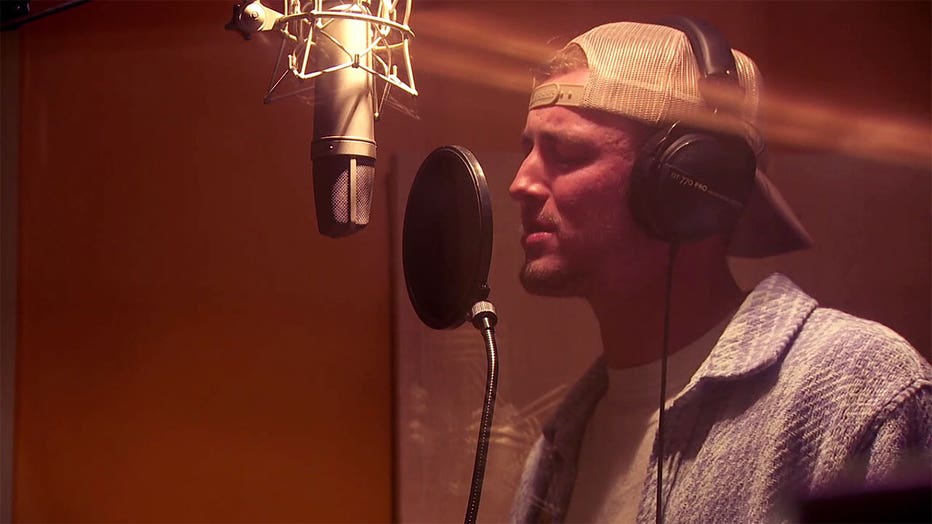 Blake Proehl is a professional football player but is also trying to get his break in another tough industry: music. (FOX 9)

He didn't see it at the time, but this injury, this adversity, was about to give way to opportunity. It turns out Blake had to fall from grace to find his voice.

"I had a guitar and I had brought it to Minneapolis when I came here," he said. "And I just remember sitting in my bed, like, with my knee up and stuff and I would just try to learn how to play. And then one day I just started singing with it and it just, like, kind of worked out like... I was on key, like the pitch on pitch, like everything was going good."

Just for fun, he shared some videos on TikTok.

"So I posted a few videos of me singing and like they were doing pretty good," he said. "Fast forward to like December and I posted a video to my grandma and it got like 25 million views."

No one, not even Blake's family, knew he could sing like that.

Now without missing a beat, everyone around him is all in including his teammates. One of his biggest fans is also his mentor, Adam Theilen, who asked Blake to sing the National Anthem at his charity softball game. It was the first time he'd ever sing live, in public.

"I remember like I was holding the mic and I was trying to play it cool because I'm around my teammates and they're like, 'Yo, are you nervous?'" he said. "'Are you really nervous? Like, why are you nervous?' And I'm like, No, like I'm cool, like, whatever, but I'm freaking out."

"Music has like, you know, been such an important part of my healing process and my journey," he added. "That's why I get emotional when I talk about it, because there's so much power and, you know, finding, you know, a deeper part of your soul and like your heart when you're so broken, you know?"

On the day we met Blake, he found out he was cleared to play football after more than a year of rehab. He was in the studio, recording his new single "Where You Need to Be" -- a personal anthem of heartache, healing, and hope.

"You know, sitting in the seat today, I would say I know it sounds crazy, but I wouldn't," he said. "I definitely wouldn't take it back. I just learned so much about myself. And just like, how important certain relationships are in your life and understanding that adversity is really where you find yourself."

These days, Blake finds himself balancing his two passions. Football is his priority and he works on music in his downtime. But not a day goes by when he's not singing, humbled by the blocks life's thrown at him, grateful for the Hail Mary he was open to receive.