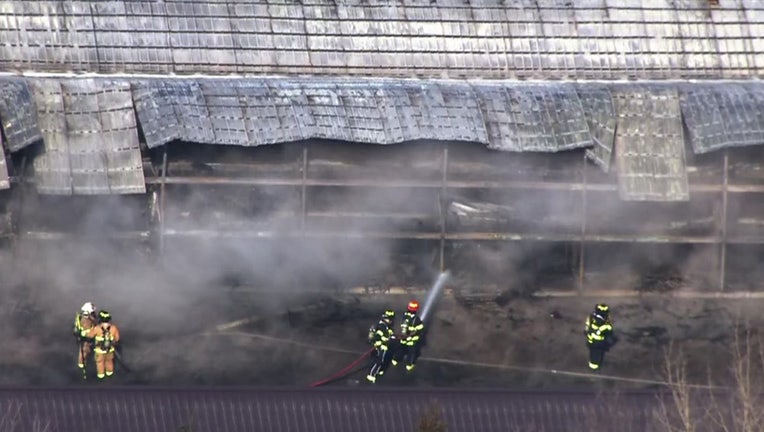 Blaine, Minn. (FOX 9) - Firefighters battled below-freezing winds, burning lumber and mulch to put out a three-alarm fire outside the Blaine Fleet Farm Thursday afternoon, managing to extinguish the flames before they reached the building itself.

"For the heavy volume of fire, our crews did a great job knocking this down and doing what they do best," Spring Lake Park-Blaine-Mounds View Fire Department Fire Chief Charles Smith told Fox 9.

Smith estimated the flames were about 50 feet high when fire trucks arrived on the scene shortly after a call came in at 11:39 a.m., with the pillar of smoke visible as far away as St. Paul. Smith said about 50 firefighters from nine departments responded, and they used "heavy streams" of water to attack the fire from two sides - the west and the east - putting out the external fire in about 20 minutes.

Smith credited the country's Mutual Aid Box Alarm System, which was implemented in the last year and automates aid requests as the fire's "alarm" ratting is upgraded, with helping to coordinate the quick response.

The cold temperature, which was about 9 degrees with a -1 wind chill, proved to be a challenge, he said, with firefighters' masks potentially freezing whenever they took them off. They used techniques like keeping the masks in their coats to cope. "It's been a cold winter, and we've had a lot of fires, so they've had plenty of practice," he said.