NASHVILLE, Tenn. - A woman from Kentucky detailed a scary experience this week that began with finding a dollar bill on the ground and ended with her in a hospital bed. The reason? Fentanyl, she alleges.

Renee Parsons, who on Sunday was traveling with her family through Nashville, Tennessee, picked up a dollar bill from the ground at a McDonald’s restaurant, according to her account shared on Facebook. Soon after, Parsons said her "body went completely numb," barely able to breathe or talk.

Parsons’ Facebook post, which has been shared over 284,000 times, details how her husband drove to St. Thomas Ascension Hospital in Nashville for treatment. The hospital determined she had an accidental drug overdose, according to WSMV-TV, which shared an image of her medical paperwork. Officers did not see any sort of residue on the dollar bill, and they did not test it for fentanyl since no one was charged, the local news station reported.

Parsons did not immediately return a FOX TV request for comment. The couple believes the dollar Parsons picked up was laced with fentanyl, but some drug safety experts have since expressed doubt over this theory in regard to overdose symptoms.

Fentanyl is a synthetic opioid that can be up to 100 times stronger than morphine, according to the U.S. Centers for Disease Control and Prevention and the U.S. Drug Enforcement Administration. But exposure through the skin is not expected to lead to toxicity "due to its extremely poor penetration of the skin barrier, and symptoms of intoxication from skin exposure are unlikely," a Health and Human Services fact sheet for first responders states.

In fact, a person overdosing on fentanyl by simply coming into casual contact with the drug would be "an incredibly rare event," according to Dr. Caleb Alexander, epidemiologist and drug safety expert at the Johns Hopkins Bloomberg School of Public Health.

"More or less, like lightning striking," said Alexander, who studies the use, safety, and effectiveness of prescription medicines.

"The skin is a very good barrier and defense against a lot of things that are out there in the world, and it would be incredibly unusual for somebody to touch something that was contaminated with fentanyl and subsequently to experience a really serious, adverse effect from it," he added. 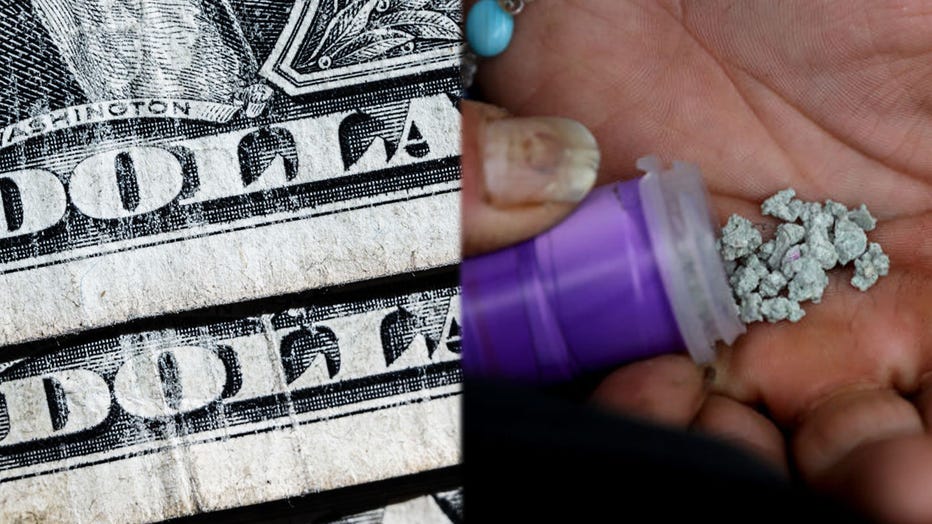 FILE IMAGES - A close-up of $1 bills is pictured, alongside an image of a person holding 3.5 grams of fentanyl on May 3, 2022, in Vancouver, British Columbia. (Photos: Silas Stein/picture alliance via Getty Images & Gary Coronado / Los Angeles Ti

Pharmaceutical fentanyl was developed for pain management treatment of cancer patients and applied in a long-acting patch on the skin, providing a slow, steady exposure to it over multiple days. But because of its powerful opioid properties, it has also helped drive the nation’s drug overdose epidemic.

The drug can also be absorbed into the body via inhalation and oral exposure or ingestion. Alexander said it’s "theoretically possible" that someone could experience adverse effects by touching something with a lot of fentanyl on it and then proceeding to touch their nose, mouth, or eyes. But he added that if it happened, "it would be a very, very rare event."

"Most people that are getting injured or unfortunately succumbing to fentanyl are taking it," he said. "They’re either using an opioid or they’re using cocaine or another drug that happens to be contaminated with fentanyl — but they’re not just innocently touching a surface — a counter or a tabletop or something — and then experiencing an adverse effect from it."

Misinformation and panic over casual contact with fentanyl have continued to spread rapidly online. A study published in 2020 found that police and other authorities, including the DEA, have "amplified rumors" and published inaccurate information about incidental exposure to fentanyl — "despite scientific consensus debunking such risk."

Last month, a sheriff’s office in Tennessee issued a warning against picking up folded dollar bills after one was found containing a substance that tested positive for methamphetamine and fentanyl.

"This is very dangerous, folks! Please share and educate your children to not pick up the money," the sheriff’s office wrote in the June 8, 2022, Facebook post. "I personally plan to push for legislation for a bill that would intensify the punishment, if someone is caught using money as a carrying pouch for such poison."

The warning was picked up by several news outlets across the country. In Parsons’ account of what happened, she referenced an idea similar to this.

"...I told my husband how lucky I was to find a random dollar. Then I grabbed a wipe to wipe off my hands bc I remembered him telling me not to pick up money off the ground as people have been putting it in fentanyl," Parsons wrote in the Facebook post. "As he began to somewhat lecture me it hit me like a ton of bricks. All of a sudden I felt it start in my shoulders and the feeling was quickly going down my body and it would not stop."

Another cause of concern is fentanyl mixed with other illicit drugs, sometimes disguised to look like more common medications. Authorities have issued several related warnings in recent years about a surge in these fake prescription pills and fake over-the-counter drugs.

Last year, the DEA issued its first public alert in six years warning of a "significant nationwide surge in counterfeit pills." It warned how fake medication is being mass-produced by criminal drug networks in labs and made to look like legitimate prescription pills such as Percocet, Xanax, and Adderall.

The CDC states that 107,375 people in the U.S. died of drug overdoses and drug poisonings in the 12-month period ending in January 2022. Some 67% of those deaths involved synthetic opioids like fentanyl, according to the DEA.

"Some of these deaths were attributed to fentanyl mixed with other illicit drugs like cocaine, methamphetamine, and heroin, with many users unaware they were actually taking fentanyl," the DEA states on a page dedicated to "fentanyl awareness." "Only two milligrams of fentanyl is considered a potentially lethal dose; it’s particularly dangerous for someone who does not have a tolerance to opioids."

While its potency has certainly driven an uptick in overdoses in the U.S., Alexander noted the stigma around opioid use and addiction, which can create barriers to getting help. The U.S. has several safe and effective treatments for such addiction.

"Opioid addiction is common. It’s often underdiagnosed, and most importantly, it’s highly treatable. We have very safe, very effective FDA-approved medicines that can help many, many people — millions of Americans — to lead healthier and successful lives in recovery."