The US Centers for Disease Control and Prevention updated its mask guidance on Tuesday to recommend that people who are fully vaccinated against COVID-19 resume wearing masks indoors in parts of the country with high levels of the virus. The public health agency also advised everyone in K-12 schools to wear masks regardless of vaccination status.

WASHINGTON - The Biden administration announced Thursday it will allow a nationwide ban on evictions to expire Saturday, arguing that its hands are tied after the Supreme Court signaled the moratorium would only be extended until the end of the month.

The moratorium was put in place last September by the Centers for Disease Control and Prevention.

"Given the recent spread of the delta variant, including among those Americans both most likely to face evictions and lacking vaccinations, President Biden would have strongly supported a decision by the CDC to further extend this eviction moratorium to protect renters at this moment of heightened vulnerability," the White House said in a statement. "Unfortunately, the Supreme Court has made clear that this option is no longer available." 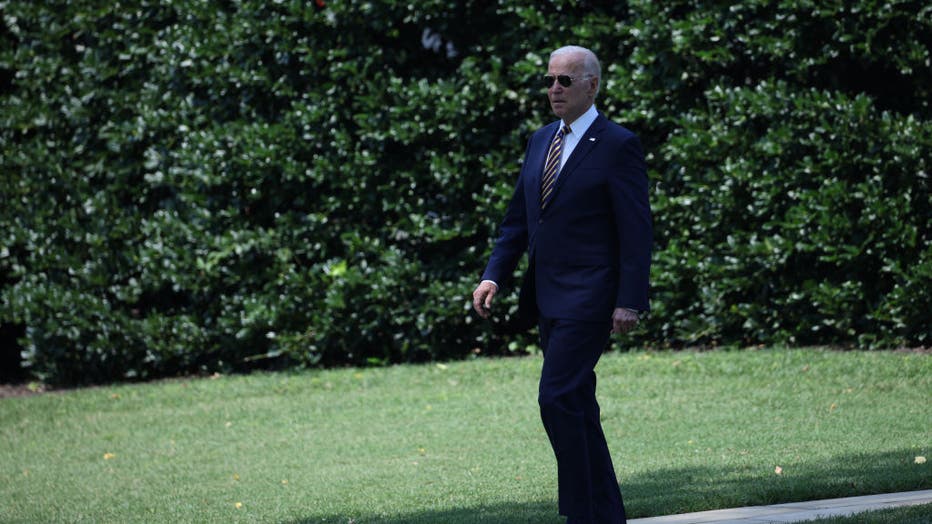 President Joe Biden walks board Marine One on the South Lawn of the White House on July 28, 2021, in Washington, D.C. (Photo by Anna Moneymaker/Getty Images)

The court mustered a bare 5-4 majority last month, to allow the eviction ban to continue through the end of July. One of those in the majority, Justice Brett Kavanaugh, made clear he would block any additional extensions unless there was "clear and specific congressional authorization."

By the end of March, 6.4 million American households were behind on their rent, according to the Department of Housing and Urban Development. As of July 5, roughly 3.6 million people in the U.S. said they faced eviction in the next two months, according to the U.S. Census Bureau’s Household Pulse Survey.

Dr. Rochelle Walensky, director of the Centers for Disease Control and Prevention, said in June this would be the last time the moratorium would be extended when she set the deadline for July 31. It was initially put in place to prevent the further spread of COVID-19 by people put out on the streets and into shelters.

Housing advocates and some lawmakers have called for the moratorium to be extended due to the increase in coronavirus cases and the fact so little rental assistance has been distributed.

Congress has allocated nearly $47 billion in assistance that is supposed to go to help tenants pay off months of back rent. But so far, only about $3 billion of the first tranche of $25 billion has been distributed through June by states and localities. Some states like New York have distributed almost nothing, while several have only approved a few million dollars.

"The confluence of the surging delta variant with 6.5 million families behind on rent and at risk of eviction when the moratorium expires demands immediate action," said Diane Yentel, executive director of the National Low Income Housing Coalition.

"The public health necessity of extended protections for renters is obvious. If federal court cases made a broad extension impossible, the Biden administration should implement all possible alternatives, including a more limited moratorium on federally backed properties."

Gene Sperling, who is charged with overseeing the implementation of Biden’s $1.9 trillion coronavirus rescue package, said it was key that states and local authorities speed up the rental assistance distribution.

"The message is that there are no excuses," he told The Associated Press.

"States and cities across the country have shown these programs can work, that they can get money out the door effectively and efficiently," he continued. "The fact that some states and cities are showing they can do this efficiently and effectively makes clear that there is no reason that every state and city shouldn’t be accelerating their funds to landlords and tenants, particularly in light of the end of the CDC eviction moratorium."

The trouble getting rental assistance to those who need it has prompted the Biden administration to hold several events in the past month aimed at pressuring states and cities to increase their distribution, coax landlords to participate and make it easier for tenants to get money directly.

Associate Attorney General Vanita Gupta also has released an open letter to state courts around the country encouraging them to pursue measures that would keep eviction cases out of the courts. On Wednesday, the Consumer Financial Protection Bureau unveiled a tool that allows tenants to find information about rental assistance in their area.

Despite these efforts, some Democratic lawmakers had demanded the administration extend the moratorium.

"This pandemic is not behind us, and our federal housing policies should reflect that stark reality. With the United States facing the most severe eviction crisis in its history, our local and state governments still need more time to distribute critical rental assistance to help keep a roof over the heads of our constituents," Democratic U.S. Reps. Cori Bush of Missouri, Jimmy Gomez of California and Ayanna Pressley of Massachusetts said in a joint statement.

But landlords, who have opposed the moratorium and challenged it repeatedly in court, were against any extension. They have argued the focus should be on speeding up the distribution of rental assistance.

This week, the National Apartment Association and several others this week filed a federal lawsuit asking for $26 billion in damages due to the impact of the moratorium.

"Any extension of the eviction moratorium equates to an unfunded government mandate that forces housing providers to deliver a costly service without compensation and saddles renters with insurmountable debt," association president and CEO Bob Pinnegar said, adding that the current crisis highlights the need for more affordable housing.

"Our nation faces an alarming housing affordability disaster on the horizon — it’s past time for the government to enact responsible and sustainable solutions that ultimately prioritize making both renters and housing providers whole," he added.