COLUMBUS, Ohio - The man who gunned down nine people in Dayton, Ohio, two years ago had fantasized about mass shootings, serial killings and murder-suicide for at least a decade before carrying out the Aug. 4, 2019 attack, the FBI said Monday as it announced the conclusion of its investigation.

Shooter Connor Betts didn't share specific details with friends or family members about his fantasies, underscoring the importance of people being attune to subtle changes in an individual, the agency said.

A phenomenon known as "bystander fatigue" may account why no one reported Betts to authorities before the shooting, according to a two-page FBI summary of its report.

That term is used "to describe the passivity, inaction, or inattention to concerning behaviors observed by individuals who have a close, interpersonal relationship to a person of concern due to their prolonged exposure to the person’s erratic or otherwise troubling behavior over time," the FBI said.

Betts, 24, was killed by police half a minute after he opened fire in Dayton’s crowded Oregon District entertainment area. Armed with an AR-15 style rifle and an extended ammunition magazine, Betts killed nine people, including his sister, and wounded dozens more. 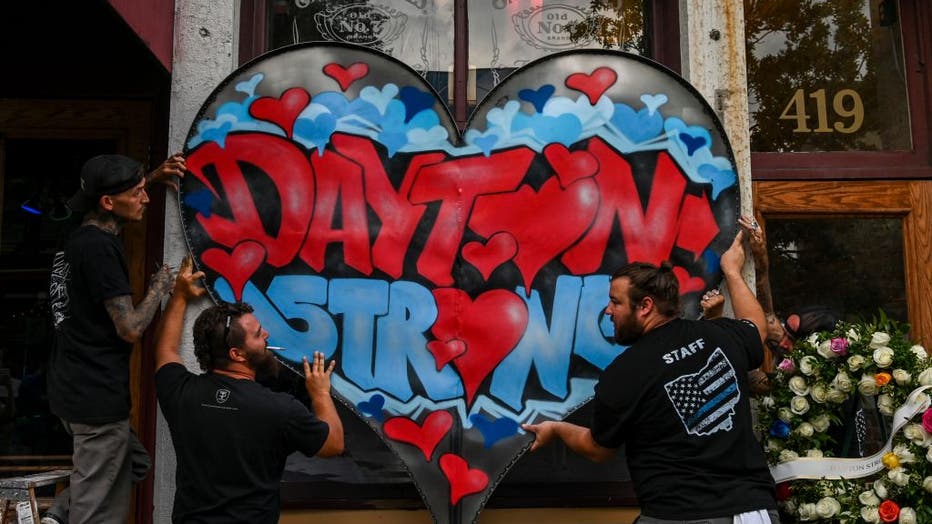 FILE - People hang a metal-fabricated "Dayton Strong" sign on the front of Ned Pepper's Bar at the site where Dayton mass shooting gunman Connor Betts was gunned down by police in the city's historic Oregon District on Aug. 6, 2019, in Dayton, Ohio.

Early on, police investigators said Betts had a "history of obsession with violent ideations with mass shootings and expressed a desire to commit a mass shooting." The FBI said it uncovered evidence Betts "looked into violent ideologies."

The FBI’s summary of its investigation did not address whether Betts intended to kill his sister, Megan, or if her death was inadvertent.

A friend of Connor Betts told investigators he bought body armor, a 100-round magazine and a part for Betts’ gun. However, they concluded there was no indication he knew of Betts’ plans.

The friend, Ethan Kollie, pleaded guilty to unrelated federal firearms charges and was sentenced to 2 1/2 years in prison.

In August, family members of four victims sued the magazine maker, Kyung Chang Industry USA Inc., saying the device serves no purpose other than allowing for the killing of as many people as possible. The magazine allowed Betts to fire 41 rounds in 32 seconds.