On day two of witness testimony in the Kim Potter trial, the state called to the stand Alayna Albrecht-Payton, Daunte Wright's girlfriend who was in the car with him during the traffic stop, and officers and paramedics who responded on the scene after the shooting.

MINNEAPOLIS (AP) - After prosecutors spent nearly a day reconstructing the moments after a suburban Minneapolis police officer shot and killed Daunte Wright, one of her attorneys had heard enough. Paul Engh asked for a mistrial, decrying the "sordid pictures" that he said were irrelevant and were shown repeatedly to inflame the jury’s sympathies.

But those details and the testimony of secondary witnesses, which may not directly affect whether the jury finds former Brooklyn Center Officer Kim Potter guilty or acquits her, are part of a bigger-picture prosecution strategy to not only convict her of manslaughter, but to send her to prison for a longer term than she could get otherwise. 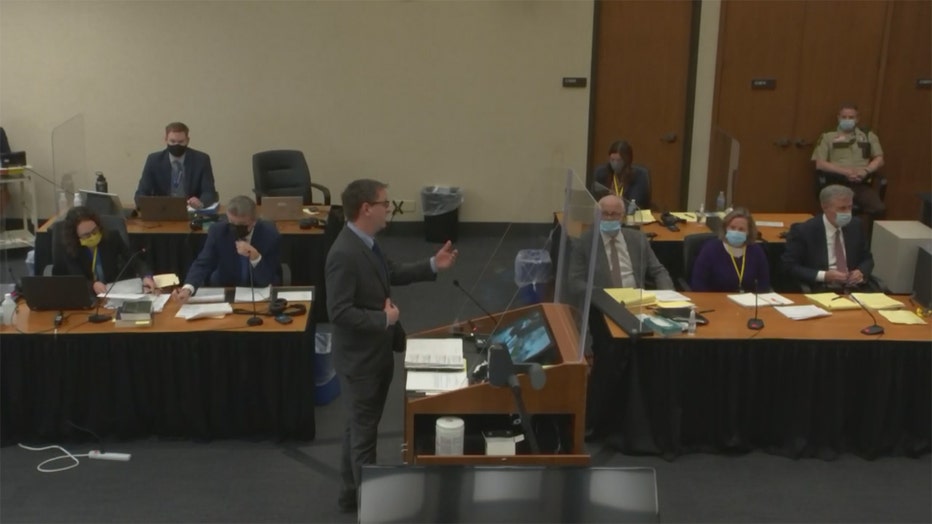 Attorneys and defendant Kim Potter at her trial in the shooting death of Daunte Wright.

Minnesota judges must follow state sentencing guidelines with a range that offers little leeway without having to explain their reasons. If prosecutors want to get a sentence longer than the range allows, they have to persuade a judge that aggravating factors warrant a tougher sentence. And that’s what prosecutor Matthew Frank said he was doing.

Frank and his fellow prosecutors on Thursday presented a stream of officers, emergency medical workers and civilians who gave extensive details — accompanied by sometimes graphic videos and photos — about what happened in the minutes between Potter shooting Wright and paramedics declaring him dead at the scene where Potter and other officers tried to arrest the 20-year-old during a traffic stop.

Potter and the officer she was training, Anthony Luckey, stopped Wright the afternoon of April 11 for expired license tags and an air freshener hanging from his mirror. Testimony and video evidence shows that Wright got out of the car but tried to break away and get back in when the officers told him there was a warrant for his arrest on a gross misdemeanor weapons possession violation.

Potter and her attorneys have said she meant to use her Taser to stop him but accidentally grabbed her gun before she shot Wright in the chest.

Much of Thursday’s testimony focused on what happened after Potter shot Wright and he then drove off and crashed into an oncoming car about a block away. The defense objected multiple times, arguing that the testimony and some of the images shown were needlessly repetitive and inflammatory.

"I DIDN'T KNOW WHAT TO DO" Daunte Wright’s distraught girlfriend Alayna Albrecht-Payton recalling the immediate aftermath of the shooting inside Daunte's car, putting pressure on his chest to stop the bleeding. Under cross examination, Alayna confirmed she and Daunte smoked marijuana before the traffic stop.

Engh told Judge Regina Chu that the issue at hand was Potter’s thought process in the moment that she yelled "Taser, Taser, Taser" and pulled the trigger of her gun.

But Engh said the state had spent "an inordinate amount of time presenting prejudicial evidence" about the crash, which he said was caused by the gravely wounded Wright’s excessive speed. "I didn’t see any evidence directed towards the proof of guilt today, but rather evidence of sordid pictures and prejudicial impact that had little relevance," he said.

Frank countered that because the state is seeking a lengthier sentence, the evidence was relevant to show that Potter’s actions recklessly created a danger to others. He said she shot Wright when he was still in a position to operate his car, and that she violated her position of trust as an officer. He blamed her for the crash, in which Wright’s girlfriend and an elderly passenger in the oncoming car were seriously injured. The state also contends that Potter’s actions endangered Luckey and another officer who was assisting in the arrest.

The driver, who was in the car Wright struck but wasn’t seriously injured, testified that the crash accelerated her husband’s declining health. Her daughter’s testimony backed that up. Wright’s girlfriend said she still suffers from the effects of her broken jaw. Jurors saw a photo of her bleeding from the mouth.

The testimony of officers who rushed to the crash scene, and videos, suggested that Potter’s actions might have put them at risk and delayed attempts to save Wright’s life. They told the jury they didn’t know at first that Wright had been shot and they weren’t sure what they were dealing with at the crash scene. They said that because of the possibility that Wright was armed — he wasn’t — they held back with guns drawn for about 8 1/2 minutes before pulling him from his car and trying to resuscitate him.

Prosecutors must prove aggravating circumstances — known as "Blakely factors" under a 2004 Minnesota Supreme Court decision — to get a sentence of more than eight years and seven months. The statutory maximum is 15 years on the most serious count. They haven’t said how much extra prison time they’ll seek if Potter is convicted.

A similar process happened in the trial this year of former Minneapolis police officer Derek Chauvin, who was convicted of second-degree murder in the death of George Floyd. Frank and other prosecutors in that case asked Judge Peter Cahill for a longer sentence than the 12 1/2 years recommended under the sentencing guidelines. The judge sentenced Chauvin to 22 1/2 years, saying prosecutors established that Chauvin abused his position of authority and treated Floyd with particular cruelty, that several children witnessed the crime live, and that Chauvin knew that kneeling on Floyd’s neck was dangerous.