Cleanup efforts are underway after an oil spill near Huntington Beach, California, over the weekend. Officials with Amplify Energy are investigating the cause of the spill and attempting to save all of the wildlife threatened by what experts are calling an "ecological disaster."

RESERVE, La. - Michael Coleman's house is the last one standing on his tiny street, squeezed between a sprawling oil refinery whose sounds and smells keep him up at night and a massive grain elevator that covers his pickup in dust and, he says, exacerbates his breathing problems.

Coleman, 65, points to the billowing smokestacks just outside his backyard. "Oh, when the plants came in, they built right on top of us," he said. "We was surrounded by sugarcane, and now we’re surrounded by (industrial) plants."

The oil company offered Coleman a buyout, but he rejected it. "I’m waiting for a fair shake," he said in an interview on the front steps of the home he has lived in for more than 50 years. In the meantime, he copes with high blood pressure, thyroid problems and other health issues that he attributes to decades of pollution from his industrial neighbors, a Marathon Petroleum refinery and a Cargill grain depot.

RELATED: $50B investment will address contaminants in US drinking water, EPA announces

A Toxics Release Inventory prepared by EPA shows that minority groups make up 56% of those living near toxic sites such as refineries, landfills and chemical plants. Negative effects include chronic health problems such as asthma, diabetes and hypertension.

"I’m able to put faces and names with this term that we call environmental justice," Regan said at a news conference outside Coleman’s ramshackle home, where a blue tarp covers roof damage from Hurricane Ida. 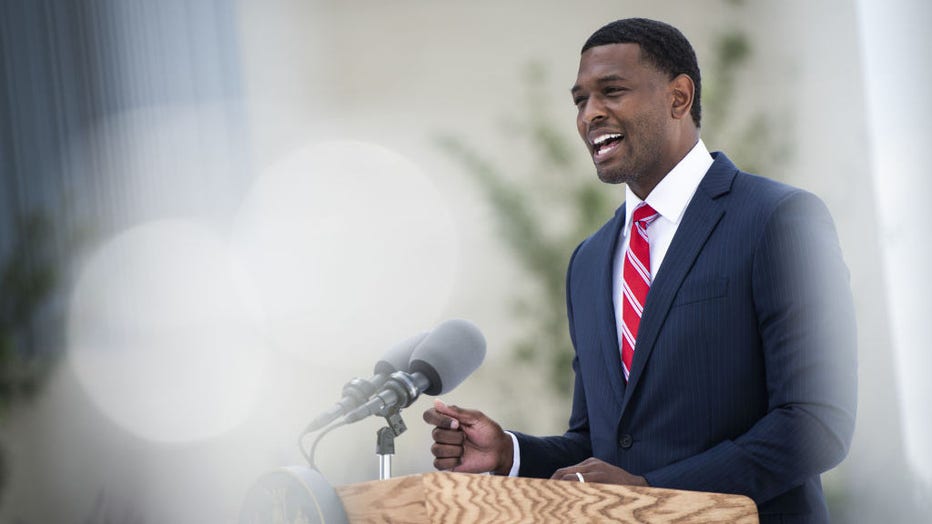 "This what we are talking about when we talk about ‘fence-line communities’ — those communities who have been disproportionately impacted by pollution and are having to live in these conditions," Regan said, gesturing to the grain elevator in front of him and refinery behind.

In nearby St. James, Regan met with Brenda Bryant, whose neighborhood is surrounded by oil storage tanks and a hulking refinery.

"We are actually sandwiched in. And I’m the meat," Bryant told Regan, who assured her that she and others he met with "will have a seat at the table" as officials develop solutions for long-ignored communities.

A former environmental regulator in his native North Carolina, Regan has made environmental justice a top priority since taking over as EPA head in March. As the first Black man to lead the agency, the issue "is really personal for me, as well as professional,'' Regan said in an interview.

Historically marginalized communities like St. John and St. James, along with cities such as New Orleans, Jackson, Mississippi, and Houston will benefit from the $1 trillion bipartisan infrastructure law signed by President Joe Biden, Regan said. The law includes $55 billion for water and wastewater infrastructure, while a sweeping climate and social policy bill pending in the Senate would pump more than twice that amount into EPA programs to clean up the environment and address water and environmental justice issues.

While legislation can help, Regan acknowledged that decades of neglect and widespread health problems among mostly Black and Brown communities won’t be solved overnight. Loose permitting requirements for industrial sites, along with exclusionary zoning laws and housing practices, have long funneled racial and ethnic minorities into areas near toxic pollutants at rates far higher than the overall population.

At a congressional hearing in October, oil company executives sidestepped questions about whether refineries and other facilities are more likely to be located in low-income and minority communities.

"Your profit-driven choices threaten my life, the lives of my family, my neighbors, and our communities every single day," Bush responded.

Environmental injustice is not limited to the South, and Regan has also visited hard-hit areas in cities such as Chicago, Detroit and Los Angeles, as well as brownfields and tribal areas in North Dakota.

"For the first time we’re not questioning whether or not these environmental injustices exist," he said. "We are actually acknowledging that they do. We need to give these individuals a voice and talk about what we’re going to do to solve these problems moving forward.''

More immediately, Regan promised that EPA will use its enforcement power to ensure a former DuPont petrochemical plant near Coleman’s home complies with federal regulations on emissions of chloroprene and other harmful chemicals. The facility is now owned by Japanese conglomerate Denka.

"We have enforcement authority that we’re taking a very close look at to bring the facility in compliance — not just this facility, but all the facilities across the country who have been non-compliant, who have not honored the agreements that we have to be good neighbors and protect these communities," he told residents in St. John.

"The message here to these communities is, we have to do better and we will do better," Regan said.

Regan's first stop on the tour was at Wilkins Elementary School in Jackson, Mississippi, where students are forced to use portable restrooms outside the building because low water pressure from the city’s crumbling infrastructure makes school toilets virtually unusable.

The pressure was so low on the day Regan visited that the school was closed. The next day, more than a dozen Jackson schools were closed because of a lack of water.

As the father of an 8-year-old, "my heart was broken today," Regan told The Associated Press. "It’s very frustrating to see the disruptions they face."

Fourth-graders brought to the school to meet with Regan spoke of their own frustrations. Kingston Lewis, 9, said he doesn’t like going outside to use the restroom in a mobile trailer.

"It takes a lot of learning time throughout our day, and it has an unpleasant scent sometimes when you go outside," he told Regan.

Principal Cheryl Brown called the school’s dependence on portable toilets "degrading" and "inhuman at all levels." Mayor Chokwe Antar Lumumba called the water outages "a cycle of humiliation within our community" and an example of "what it looks like for our children when we fail to provide."

Lumumba said in an interview that his impoverished city needs about $2 billion to fix its water infrastructure, but expects to receive far less from the infrastructure law and other federal spending. The majority Black city often "fails to get its equitable share of resources that funnel through the state" and its Republican governor and GOP-controlled legislature, he said.

Regan also visited Gordon Plaza, a New Orleans neighborhood built on the site of a former toxic landfill, and the creosote-contaminated Kashmere Gardens neighborhood in Houston. Gordon Plaza was designated as a Superfund site in the 1990s, but dozens of mostly Black families still live there, waiting for a buyout, and many feel forgotten.

A 2019 report by Louisiana State University found that the city’s Desire section, which includes Gordon Plaza, had the second-highest cancer rate in the state.

During a walking tour, neighborhood residents gave Regan a T-shirt as they urged him to remember their community’s name. They cheered when he said the words "Gordon Plaza" had reached the White House. "You have my commitment that the EPA will partner with you all to solve this problem," he said.

"You’re trying to live out the American Dream — which turns out to be a nightmare — and you can’t get justice, you know," said resident Earl Smothers.

Still, she’s optimistic that "the wheels are aligning" to finally address problems that have festered locally for decades.

"I think putting a face and a name on these problems makes it personal," Wright said. "When you can taste the chemicals in your mouth and smell the toxins downwind, it’s a lot more difficult to ignore."