Eddie Money sold more than 28 million records over the course of a career that spanned four decades.

LOS ANGELES - Eddie Money, the singer known for such hits as "Two Tickets to Paradise" and "Take Me Home Tonight" has died at the age of 70, according to FOX News.

"The Money Family regrets to announce that Eddie passed away peacefully early this morning," his family said in a statement to FOX News. "It is with heavy hearts that we say goodbye to our loving husband and father. We cannot imagine our world without him. We are grateful that he will live on forever through his music."

He sold more than 28 million records over the course of a career that spanned four decades, and his songs have been featured in countless movies, TV shows and even video games, such as “Grand Theft Auto” and “Guitar Hero.”

Born Edward Joseph Mahoney on March 21, 1949, in Brooklyn, New York, he spent his childhood dreaming of a musical career, but decided to follow in his father’s footsteps in the path of public service after high school.

Mahoney served as a police officer for the City of New York for two years before moving to Berkeley, California, where he donned his musician persona and began playing shows in local clubs and venues. It was during this transformative time that Mahoney changed his name to Eddie Money. 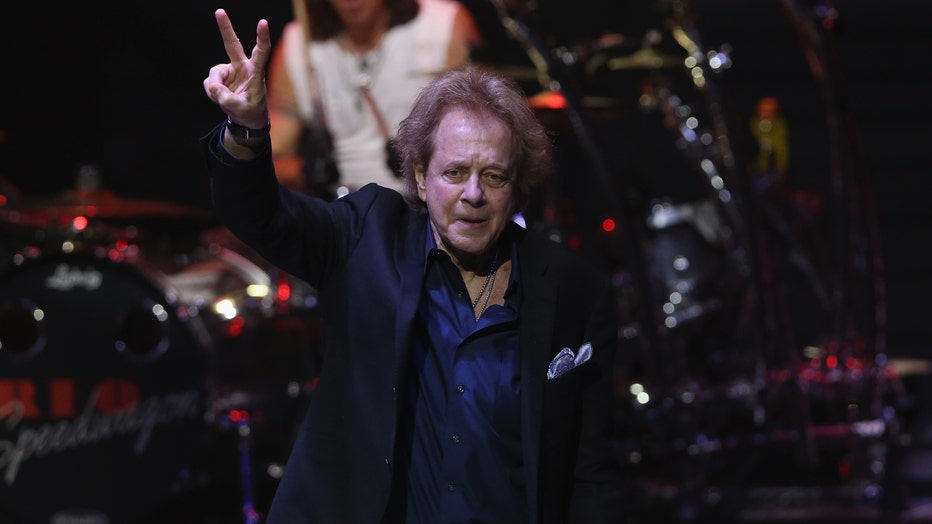 His big break came in 1976, when the young aspiring rocker made the acquaintance of legendary Bay Area promoter Bill Graham while performing at one of his events. The two quickly formed a staying business relationship, and Graham acted as both mentor and manager to Money in the subsequent years.

"Eddie Money has it all…not only can he sing, write and play, but he is a natural performer," Graham said of his protégé.

Between 1978 and 1982, Money released four albums that made it into the Top 40 of Billboard’s Top 200, with a slew of singles climbing into the Billboard Hot 100 singles chart, including “Baby Hold On” and “Two Tickets to Paradise,” which peaked at No. 11 and No. 22, respectively.

The track featured Ronnette’s front woman Ronnie Spector, but Money had to put in work to convince Spector, then 43, to dust off her microphone and head back into the studio with him.

Money told Billboard during a 2015 interview that when he originally called Spector to inquire if she would be interested in working together on a pop-rock riff on the Ronnette’s 1963 No. 2 Hot 100 hit, “Be My Baby,” Spector was doing her dishes nonchalantly and simply told him, “I'm not really in the business anymore, Eddie.”

After Money convinced Spector to feature on the track, “Take Me Home Tonight” breathed new life into both their careers, soaring to the top of the Sept. 20, 1986, Mainstream Rock Songs chart.

In November, the track peaked at No. 4 on Billboard’s Hot 100, and it earned Money a Grammy nomination for Best Male Rock Vocal Performance the following spring.

Throughout the 1990s and 2000s, Money continued to tour and perform, and he was known for opening the summer concert season at Detroit’s DTE Energy Music Theater for almost 20 years. His daughter, Jesse Money, decided to follow in her father’s footsteps as a musician and began joining her father on tour as a backup singer in the latter part of his career.

On top of touring, Money also made a foray into television appearances in the 1990s and 2000s, such as his cameo on the show “King of Queens” in 2002, as well as a stint portraying the character Mimi’s ex-husband on “The Drew Carey Show.”

In 2018, Money ventured into reality television with the AXS show, "Real Money," that documented the home and tour life of Money and his musical family in Southern California.

Money announced his battle with cancer on Aug. 24 in a video clip that teased the Sept. 12 full episode.

In the video, Money says he discovered he had cancer after what he thought was a routine checkup. The 70-year-old learned that the disease had spread to his liver and lymph nodes, news which the singer says hit him “really, really hard.”

He suffered numerous health problems leading up to the cancer diagnosis, including heart valve surgery earlier in 2019 and a bout of pneumonia after the procedure, all of which lead Money to cancel a planned summer tour.

He leaves behind his wife of over 30 years, Laurie, and their five children, Jesse, Zachary, Joseph, Desmond and Julian.