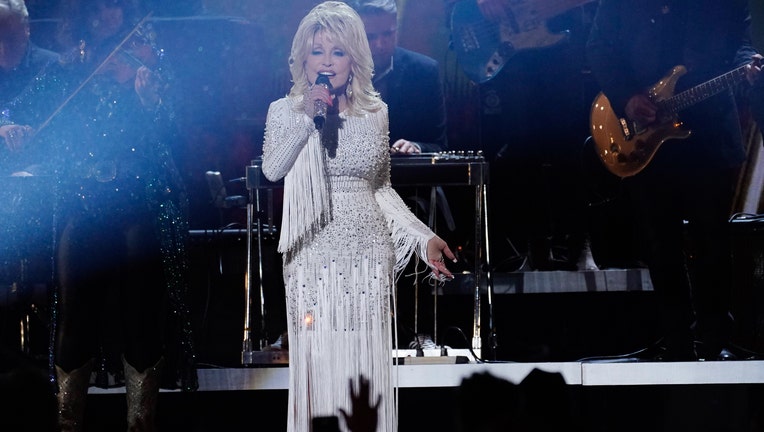 Dolly Parton performs onstage at the 53rd annual CMA Awards at the Bridgestone Arena on November 13, 2019 in Nashville, Tennessee. (Photo by Mickey Bernal/WireImage)

A statue of Dolly Parton may be erected on the grounds of the Tennessee Capitol.

State Rep. John Mark Windle proposed such a statue on the property to recognize all the country icon's contributions to the state.

The creation and installation of the statue would be funded by "non-state sources" such as "gifts, grants, and other donations," which will be put into a separate account that will raise money for the development and implementation of the plan, according to Windle's bill. He proposed a similar plan for the upkeep of the statue after it's installation.

Furthermore, the artwork will be commissioned and "shall solicit input from the public and other interested parties for purposes of developing the plan, including proposed design concepts for the statue."

In June, an online petition was filed suggesting that a statue of Parton, 74, replace those dedicated to Confederate officers.

"Tennessee is littered with statues memorializing confederate officers,"  the petition reads. "History should not be forgotten, but we need not glamorize those who do not deserve our praise. Instead, let us honor a true Tennessee hero, Dolly Parton."

The petition cited her music and Parton's Dollywood Foundation and philanthropy as reasons for her potential recognition.

"Let's replace the statues of men who sought to tear this country apart with a monument to the woman who has worked her entire life to bring us closer together," the petition reads.

On Wednesday evening, more than 25,000 signatures have been collected.

Recently, the "9 to 5" singer has been praised publicly for her $1 million donation to Vanderbilt University's coronavirus research, which helped Moderna develop a vaccine that they've said is nearly 95% effective, according to the New England Journal of Medicine.

Fans even took to Twitter in November 2020 to thank her, jokingly crediting her with "saving the world" with her donation.

Parton later spoke to "Today" about the vaccine and the role she's credited with playing in its development.

President-elect Joe Biden is unveiling a $1.9 trillion coronavirus plan aimed at speeding up the vaccine rollout and providing financial help to individuals, states and local governments and businesses.

"I’m just happy that anything I do can help somebody else," she said. "When I donated the money to the COVID[-19] fund I just wanted it to do good and evidently, it is! Let’s just hope we can find a cure real soon."

A spokesperson for Parton did not immediately respond to Fox News' request for comment.

The "Christmas on the Square" star also appeared on "The One Show" in the U.K., where she explained that she "just felt so proud to have been part of that little seed money that will hopefully grow into something great and help to heal this world," according to BBC.

However, the singer's other achievements certainly shouldn't be overlooked, as she's considered among country music's most influential artists. She's earned nine Grammys and 50 nominations.

Twice she's been nominated for an Oscar for best original song with additional Golden Globe nominations for her music and acting. And the star also saved a dancer on the set of her latest film from being hit by a vehicle.

"We were on set and I was at the hot chocolate station and they said go back to your beginning positions," dancer-actress Talia Hill previously told Inside Edition. "So, there is a vehicle moving and I was walking and then somebody grabbed me and pulled me back and I looked up and it was Dolly Parton and I was like ... surprised."

President Obama has also acknowledged that she "deserves" a Medal of Freedom and joked that he'd "call" Joe Biden and put in a good word for the songstress.