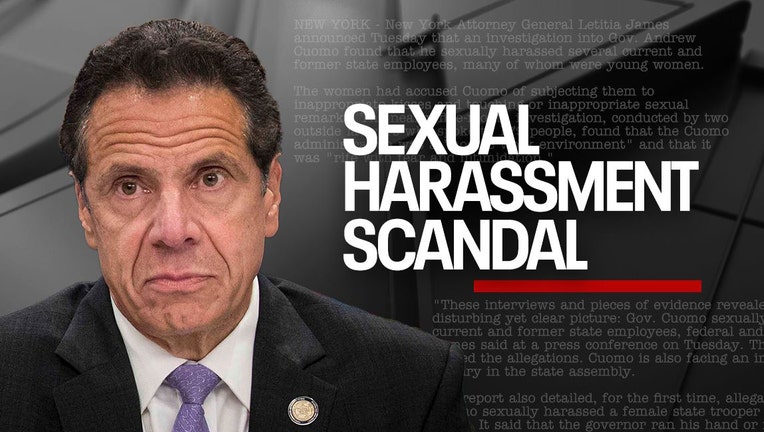 The exact nature of the inquiry and its current status was unclear.

The office of Gov. Kathy Hochul, who took office when Cuomo resigned in August, said it hired a law firm in October to handle "matters relating to ongoing investigations inherited from the previous administration," and that one of those matters was an investigation by the Justice Department's civil rights division and the U.S. attorney's office in Brooklyn.

"As this is an ongoing investigation, we will not comment further at this time," said Hochul's press secretary, Hazel Crampton-Hays.

The law firm's hiring was initially disclosed in a contract made public Thursday as a result of public records requests by several news organizations.

The contract said the firm, Willkie Farr and Gallagher, is representing the governor's office in several investigations related to the previous administration, including a Justice Department inquiry "related to sexual harassment claims made against the then-governor."

Cuomo announced he would resign Aug. 10, one week after an investigative report commissioned by New York Attorney General Letitia James concluded he had sexually harassed 11 women. His last day in office was Aug. 23.

Cuomo's spokesperson, Rich Azzopardi, said the former governor had been made aware of the inquiry.

"Our understanding is that the civil division opened an inquiry in August based upon the AG's politically motivated sham report and we have heard nothing since," he said.

The department's civil rights division has some enforcement powers under federal anti-discrimination law. It launched an initiative in 2018 to fight sexual harassment of government employees and handles complaints made under the U.S. Equal Employment Opportunity Commission.

The office of Attorney General Letitia James released more transcripts and videos of testimony from the investigation into Gov. Andrew Cuomo. The batch included numerous video clips of Cuomo's testimony.

Cuomo has acknowledged making comments to some women that made them uncomfortable, including jokes interpreted as unwanted flirtation, but he has denied sexually harassing anyone or touching anyone inappropriately.

The Albany County sheriff filed a criminal complaint against Cuomo this fall accusing him of groping a female aide at the governor's mansion in late 2020. His arraignment on the charge has been postponed until at least January while the county district attorney investigates the allegations.