A flight from Miami to Atlanta was delayed after a passenger hit a flight attendant in the face after she confronted them for not following crew safety instructions. Credit: @AntwanetteMoore/Twitter

WASHINGTON - A Delta Air Lines passenger is facing a $27,500 fine for allegedly assaulting a flight attendant amid a dispute over the flight attendant’s instructions and the airline’s mask policy, officials said.

The Federal Aviation Administration said the incident occurred on a flight from Miami to Atlanta on Oct. 19.

The FAA said the unnamed passenger was traveling with another person who refused to wear his mask, fasten his seat belt or put up the tray table in front of him. As a result, the flight returned to the gate due to his refusal to follow the flight attendant’s instructions and the two passengers were asked to voluntarily get off the plane, the agency said. 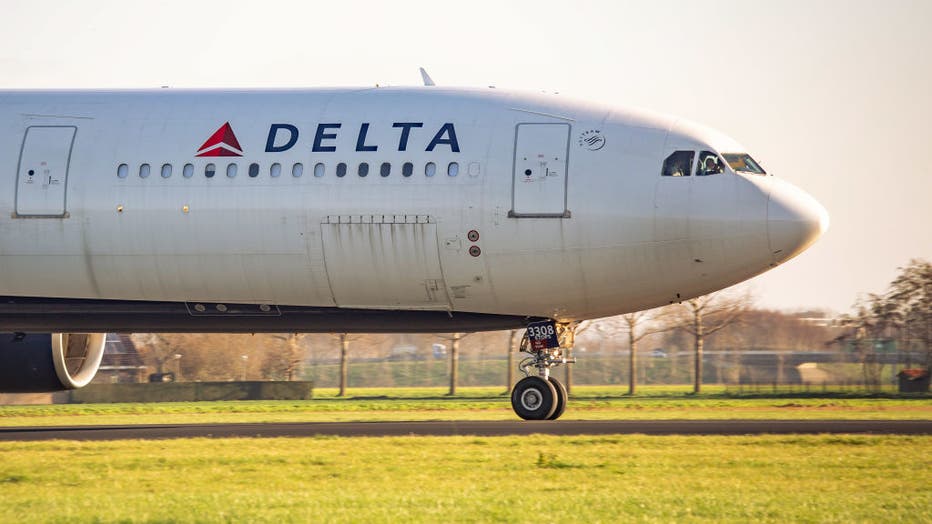 FILE - A Delta Air Lines Airbus A330 aircraft is pictured on Nov. 18, 2020 in Amsterdam, Netherlands. (Photo by Nicolas Economou/NurPhoto via Getty Images)

The passenger has 30 days to respond, the agency said. It does not identify individuals facing civil penalties.

The October incident on the flight was captured on video by fellow passengers. At the time, Delta issued a statement to FOX 35, saying in part that safety of travelers and crew is the carrier’s highest priority.

"There is nothing more important than the safety of our people and customers," Delta said. "We do not tolerate violence of any kind and this situation is currently under investigation. That’s why two customers who did not comply with crew safety instructions were asked to deplane flight 1997 this evening. We apologize to customers for the flight delay this caused."

In January, the FAA implemented a stricter policy on unruly behavior in the wake of lawmakers being harassed on flights over the U.S. presidential election, violence at the U.S. Capitol, and passengers not complying with pandemic-related mask requirements.

At the time, the agency said it had seen "a disturbing increase in incidents where airline passengers have disrupted flights with threatening or violent behavior."

"FAA Administrator Steve Dickson signed an order directing the agency to take strong action against any passenger who disrupts or threatens the safety of a flight, with penalties ranging from fines to jail time. No warnings!" the FAA tweeted Jan. 13.

Sen. Mitt Romney, R-Utah, was among those heckled by supporters of former President Donald Trump on a flight from Salt Lake City to Washington, D.C., just before the deadly Jan. 6 insurrection at the U.S. Capitol by a mob of Trump supporters. Video originally posted Jan. 5 shows a woman walking up to Romney as he worked on a computer in the airport and later referring to him as a "disgusting shame." It was followed by another clip of people chanting "traitor" at him on the plane.

Last month, Delta confirmed it had nearly 900 people on its internal no-fly list for violating policies in a statement to FOX Television Stations, but it did not provide any additional details on the ban.

Federal law prohibits a passenger from physically assaulting or threatening to physically assault the crew or anyone else on board, the FAA said. Passengers could face up to a $35,000 fine or imprisonment for such conduct.