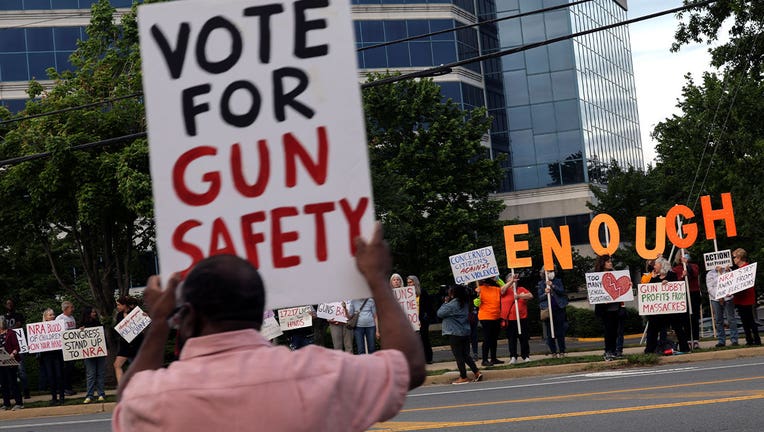 Gun-control advocates hold a vigil outside of the National Rifle Association (NRA) headquarters following the recent mass shooting at Robb Elementary School on May 25, 2022 in Fairfax, Virginia. The group is calling for gun law reforms after an 18-ye (Kevin Dietsch / Getty Images)

MINNEAPOLIS (FOX 9) - The mass shooting in Uvalde, Texas that left 19 children dead after a gunman opened fire inside a school has again sparked calls for lawmakers to act to prevent another tragedy.

Seeking answers for what the next steps should be, FOX 9 reached out to three members of the Minnesota congressional delegation who don't support gun control measures for a five-minute interview: Rep. Tom Emmer, Rep. Pete Stauber, and Rep. Michelle Fischbach.

A day after a mass shooting in Texas that left both teachers and student dead, FOX 9 reached out to the three members of the MN Congressional delegation who don't support gun control legislation. We were declined a 5-minute interview from all three. Republican representatives in Minnesota that oppose gun control legislation for their reaction.

Democrats and many other groups want more gun control laws. Advocacy group Everytown for Gun Safety writes: "This needs to be the moment when our nation draws the line, and when our lawmakers start doing their job and pass common-sense laws to keep us safe."

"The ability for an 18 year old to buy a long gun has been in effect for 60 years," said Texas Governor Greg Abbott. "Think over those 60 years we have not had an incident like this. Think of why in that time we didn’t have a school shooting. I don’t know the answer. One thing that has substantially changed is the status of mental health in our communities."

Rob Doar with the Minnesota Gun Owners Caucus agrees, it’s just not as simple as stricter gun laws. "Right now, we are seeing calls for pieces of gun control that are utterly irrelevant to the shooting that unfolded and I think that’s what’s unfortunate when there’s that emotional that reaction things like calling for universal background checks when this person passed a background check that’s not really addressing anything at the core issues."

Doar says we have to get to the root of the problem and then if it’s determined tighter gun laws will help that’s when the conversation should happen.

"If there is a clear issue that an individual is exploiting that doesn’t fall under the protections of the Second Amendment, we’re always willing to explore those," said Doar.