Congressional leaders said Dec. 16 that they're getting closer to a coronavirus relief deal and would continue to exchange proposals.

WASHINGTON - Top congressional leaders appear closer to an agreement on a long-delayed COVID-19 relief package, hoping to seal an agreement as early as Wednesday that would extend aid to individuals and businesses and help ship coronavirus vaccines to millions.

Sen. Joe Manchin, D-W.Va., a coauthor of a $908 billion bipartisan package, said leadership negotiators are closing in on an agreement that would extend direct payments of $500-$600 to most Americans but would deny Democratic negotiators long-sought aid to state and local governments. Manchin credited his bipartisan group with facilitating the breakthrough.

“I think they’re basically now putting it all together," Manchin said on CNN. “We were able to break the gridlock.” 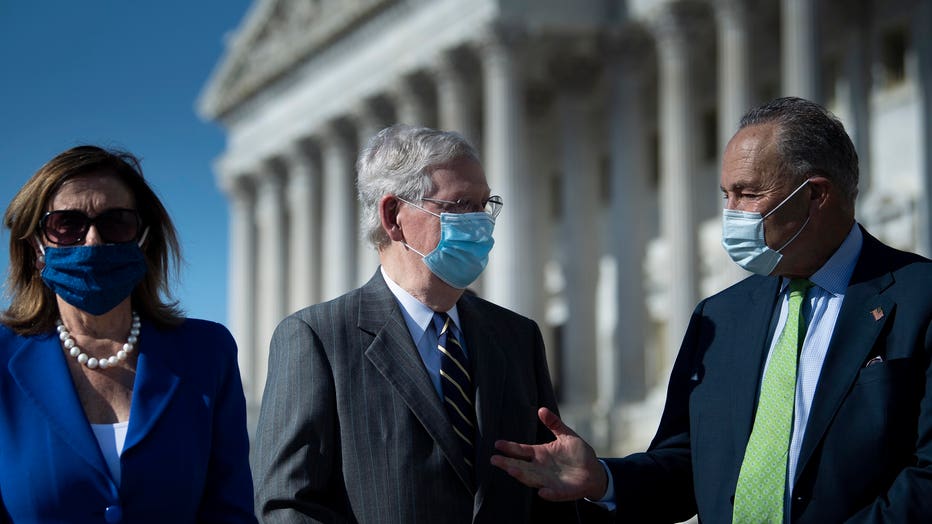 Added a Senate leadership aide: “Today is likely the day they reach an agreement.” The aide requested anonymity to characterize the rapidly moving talks. Other aides following the talks offered more cautious assessments. The emerging package is serving as a magnet for add-ons and the two sides continue to swap offers.

It is also apparent that another temporary spending bill will be needed to prevent a government shutdown at midnight on Friday. That is likely to pass by voice votes before Friday but House lawmakers will have to be summoned to Washington to vote on the emerging package, which would combine about $900 billion in COVID-19 relief with a $1.4 trillion governmentwide funding bill and a host of other remaining congressional business.

Negotiations on COVID-19 relief intensified on Tuesday after months of futility. The top Democratic and Republican leaders of Congress met twice in hopes of finally cementing a leadership agreement that would revive subsidies for businesses hit hard by the pandemic, help distribute new coronavirus vaccines, fund schools and renew soon-to-expire jobless benefits.

The true cost of a business during COVID-19 pandemic

Owning a business as the coronavirus pandemic continues on can come at a price, how much is it worth to keep it alive?

Republicans labored to keep the price tag for the long-delayed rescue package in check, seeking to prevail in a battle over help for state and local governments, while capping the cost of bonus jobless benefits and direct payments sought by Democrats.

“I think we’ve built a lot of trust," McCarthy said. “I think we’re moving in the right direction. I think there’s a possibility of getting it done.”

The uptick in activity could be a sign that an agreement is near, though COVID-19 relief talks have been notoriously difficult.

Pressure for a deal is intense. Unemployment benefits run out Dec. 26 for more than 10 million people. Many businesses are barely hanging on after nine months of the pandemic. And money is needed to distribute new vaccines that are finally offering hope for returning the country to normal.

McConnell is playing a strong hand in the lame-duck session and pushed hard to get Democrats to drop a much-sought $160 billion state and local government aid package. Several senior Democrats, including close allies of President-elect Joe Biden — who is eager for an agreement — have said they would go along now and fight for the aid next year.

Pelosi has insisted for months that state and local aid would be in any final bill, but as time is running out, Democrats appear unwilling to hold the rest of the package hostage over the demand.

“We’re not going home until this is done,” Sen. Joe Manchin, D-W.Va., said on CNN Tuesday morning. “We’ve got to get people a lifeline.”

Manchin is an architect of a bipartisan $748 billion aid package that is aimed at serving as a template for the leadership talks. President Donald Trump's chief negotiator, Treasury Secretary Steven Mnuchin, supports a package with many similar elements. There is also bipartisan support for transportation and transit assistance, funding for rural internet service and help for the Postal Service, among other provisions.

Lawmakers also worked to finalize a yearend catchall funding package that will be the basis for the last significant legislation of the Trump presidency.

There's a hoped-for deadline of midnight Friday to deliver the completed package to Trump. That is when a partial government shutdown would arrive with the expiration of last week's temporary funding bill. But there's no guarantee that the massive yearend measure will be completed in time. If the talks drag, further temporary bills could be needed.

Negotiations on the $1.4 trillion catchall spending bill are virtually completed, lawmakers say, One hard-fought compromise would deliver another $1.4 billion or so for a final installment to continue construction of his long-sought U.S.-Mexico border wall.

The post-election lame-duck session is the last chance to wrap up the unfinished work this year, a goal of all involved, though they have been slow until now to forge the often-tricky compromises required to pull the measure together.