Firefighters rescue horse after it fell on the ice

Members of Horseplay Ranch and the Loretto Fire Department helped rescue a horse after it fell on the ice. Video Courtesy: Sara Boerboon

CORCORAN, Minn. (FOX 9) - A close knit community rallied around a horse that fell on ice and didn’t have the strength to get up at a horse boarding facility in Corcoran, Minnesota. While she almost gave up, those around her did not.

Tuesday night at Horseplay Ranch, Tess, a 34-year-old mare with a bad leg, went down on some ice in her outdoor enclosure and couldn’t get back up.

Community rallies to rescue horse after it fell on ice

A close knit community rallied around a horse that fell on ice and didn’t have the strength to get up at a horse boarding facility in Corcoran, Minnesota. While she almost gave up, those around her did not.

“She had her legs out and was kind of stiff and was shaking,” said Sara Boerboon, who boards horses at Horseplay.

Those around the ranch jumped into action.

“We worked for hours to try to get her up and we were not able to,” said Mary Soligny, Horseplay Ranch owner. “She kept falling she’d get up a little and then just crash down and up and crash and she just had no strength.”

Soligny called the veterinarian and then her neighbor as things turned serious.

“She basically gave up, her eyes were glossed over her gums were pale, she was exhausted laying flat - her eyes even started closing,” said Soligny. 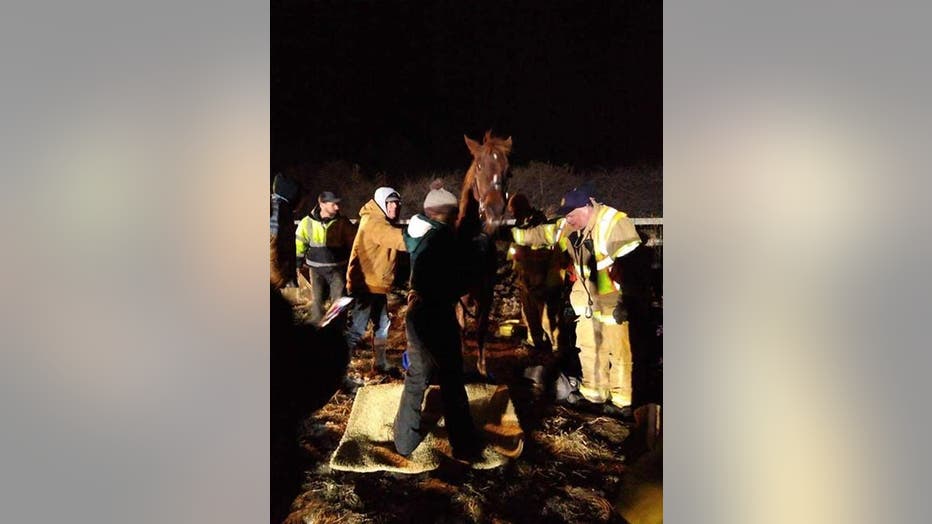 Meanwhile, another horse owner reached out to the Loretto Fire Department.

“So we get a page for a horse down and I respond in one of our duty vehicles,” said Loretto Fire Department Captain Jake Leuer. “Personally, I’ve never gotten a call like that.”

When you respond to an unusual request, you have to get creative.

“We kind of got the straps and everything hooked up under the horse and we ended up eventually getting the horse up,” said Capt. Leuer.

They used a Bobcat to hoist Tess up and got her back on solid ground.

“She actually stayed standing, I didn’t think she would stay standing, but she did – we lifted her up and wow it worked,” said Ernie Mayers, a neighbor who responded.

The mare got back up and moving – thanks to a community that did not give up.

“If it was just me and a couple girls or just me - no she would’ve, that would’ve been the end of her life and she wasn’t ready, she just couldn’t get up,” said Soligny. “She just needed help a lot of help.”

Krysia Anderson, the horse’s owner, is studying abroad and was not there when Tess was rescued. However, Anderson has been in close contact with Horseplay Ranch and says she is incredibly grateful for everyone’s help. She sent FOX 9 the following statement:

"Tess is my best friend of 13 years, and seeing her like this absolutely broke my heart. She has looked after me since I was 7 years old, and I have made a promise to give her the best care back in her old age. Now that I am studying in university overseas, Tess is left with the amazing team at Horseplay Ranch who show her the same love each day. They worked tirelessly through the evening and bitter cold to get her up, and called the Loretto FD to save the day. It's a beautiful thing to see what a community can accomplish together, and everyone motivated and treated Tess like she was their own. From the bottom of my heart, thank you to every hero that night who never gave up on my girl."