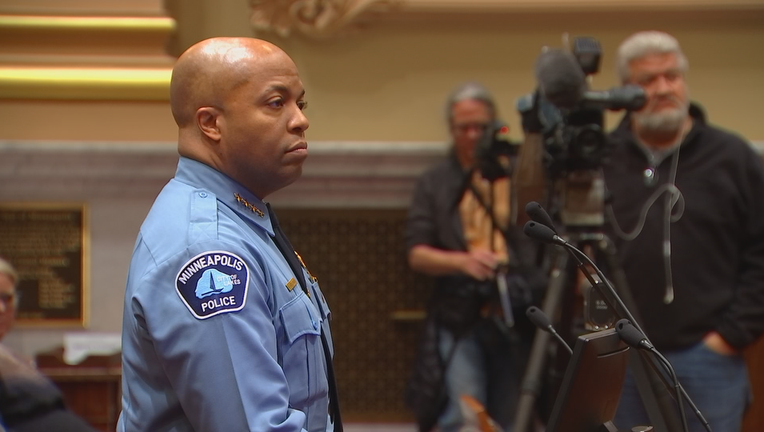 MINNEAPOLIS (FOX 9) - How the Minneapolis Police Chief plans to absorb deep cuts to the department next year is creating some heated discussion among city leaders and dozens of residents spoke up about the issue Thursday, mostly to criticize the public safety committee.

How the Minneapolis Police Chief plans to absorb deep cuts to the department next year is creating some heated discussion among city leaders and dozens of residents spoke up about the issue Thursday, mostly to criticize the public safety committee.

“They, they police department, the mayor and all civic and state leaders need to get together and lock themselves in a room and come up with a 60-day plan that puts more protection on the street now,” he said.

Earlier in the day, during a budget meeting, Police Chief Medaria Arradondo outlined the ways he plans to absorb the department’s cuts in the Mayor’s 2021 recommended budget. The new year would start with 531 sworn, full-time officers, a 73-person reduction from 2020.

Plus, the chief recommended decommissioning some non-mandated units including community response teams in order to move sworn staff into priority functions.

“The department is shrinking, that is true,” said Arradondo Thursday. “And that is significant.”

Council members pushed back on several proposed points, including the chief’s suggestion to reassign some investigative staff.

“We have to make sure that core 911 response is adequately staffed,” said Arradondo. “Because when that person picks up the phone to call 911, we’ve got to have someone there to respond to it.”

City Council President Lisa Bender pointed out, with Target not welcoming staff back to downtown headquarters until at least next summer, she questions how this and various pandemic ripple effects could impact police staffing.

“In some ways, we are becoming more like a residential community that may not need as much policing,” Bender said. “You know, in downtown during the day.”

To that, Council Member Lisa Goodman said she found the chief’s proposed changes and much of the overall discussion alarming.

“What I’m hearing is people are afraid,” Goodman said. “They want more public safety, not less.”

“To minimize this perception issue and suggest people aren’t coming downtown so therefore we would need less police is ludacris,” she added.