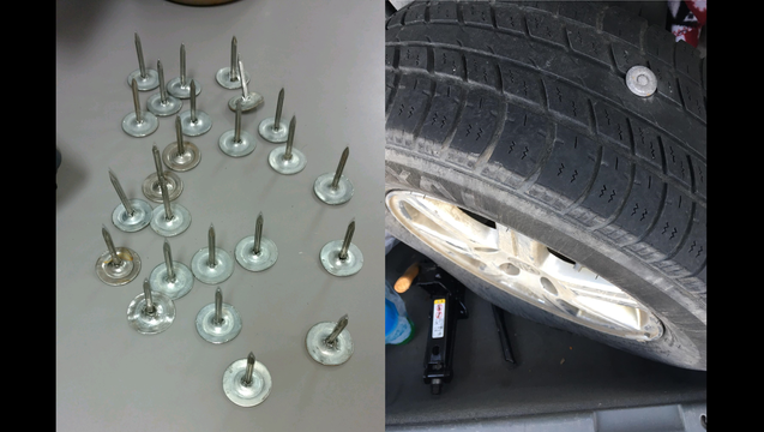 BUFFALO, Minn. (KMSP) - A 75-year-old man is facing charges of criminal damage to property after he allegedly threw nails on a road in Buffalo, Minnesota, damaging more than 100 cars.

The man had previously complained of people speeding on the road.

Back in October 2017, police responded to a report of damage to tires from what was found to be a mason's nail found on Pulaski Lane. A mason's nail is about 1.5 inches long with a sharp, pyramid-shaped point and a one-half inch steel cap.

According to the criminal complaint, police received many more complaints and learned that local tire shops repaired or replaced several tires. To date, at least 115 victims have provided statements to police attesting to the damage caused to their tires from the nails. They also reported the location where the damage occurred and provided copies of invoices related to costs of repairs, which totaled $22,630.03.

The defendant, Joseph William Kurimay, filed complaints with police in March and April 2017 about cars speeding past his home on Pulaski Lane. Kurimay "expressed dissatisfaction" with police, according to the charges, and purchased a radar gun he showed to police during one of his visits.

Kurimay has his own history of speeding, including 22 tickets on his record.

"I've investigated many damage to property cases in my 25 years as a detective, but nothing quite like this," said Det. Barrett Chrissis with Buffalo police.

"My concern is that he's a person who endangered public safety. These specific nails were the perfect nail that could catch inside of a tire even with that large washer in it. Hitting the front tire of a car could easily disable a driving mechanism of a car, steering it into oncoming traffic or into a lake," Chrissis said.

On Oct. 23, 2017, police executed a search warrant at Kurimay's home. Kurimay denied ever having mason's nails, but officers found a box of nails matching those used in the crime.

Police also obtained video surveillance footage of Kurimay from the local Menards store, along with receipts for several different purchases of at least 600 nails.

Victims Doug and Judy Bergstrom have lived in the area for decades and said that while the road is a 30 mph zone, some people go 50 mph.

"We empathized as far as the reasoning for why they were doing it, but probably not a good tactic," Judy said. "We knew he was upset because we'd walk by and talk to him and we do business with him, but I didn't know it would ever come to that."

If convicted, Kurimay faces five years in prison and/or a $10,000 fine.