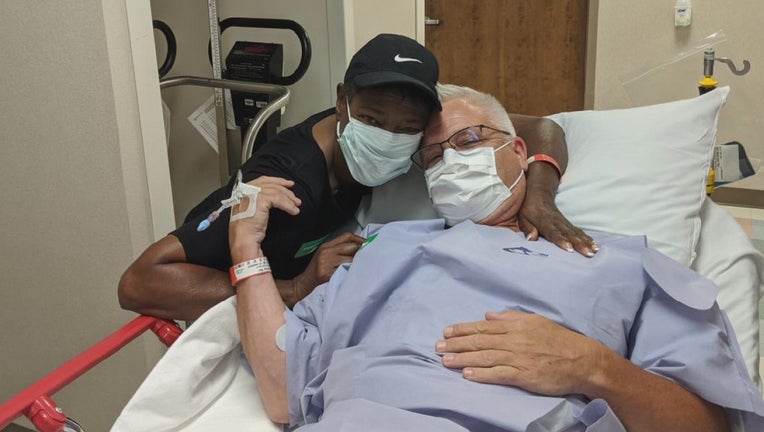 Dorothy Loonan (left) hugs Mike Oliver (right), who donated his kidney to her.

MANKATO, Minn. (FOX 9) - Up until about a year ago, Dorothy Loonan and Mike Oliver were total strangers. Now, they are friends for life.

"That's why I call it a divine intervention because it came out of nowhere," said Loonan. "Grateful, to put it mildly. How do you feel about someone who gave you a chance to live?"

Two strangers are now friends for life after a kidney donation brought them together.

Loonan had been on dialysis for five years after she collapsed and was temporarily paralyzed while working as a flight attendant for Delta Air Lines.

One day her husband was telling his work colleague, Oliver, he had been in Mankato to take her to dialysis. Oliver, who had never met Dorothy, said he would donate a kidney.

"[My husband] looked at me and kind of said, 'It’s Mike being Mike.' He blew it off," said Loonan. "Until four months later when I asked about it again because he hadn't gotten me the information and that point he did...the process started."

It took a year and a half, but Oliver was finally declared a match and last July, they had surgery to remove one of his kidneys to give to Loonan. Oliver says he was out of the hospital the next day and on a boat a couple of days after that. He has not suffered any health problems since his donation.

"Without the scar, I wouldn't know I did it," said Oliver. "Still to this day I've had no repercussions at all. I think my appendectomy was worse than that."

The mother of four and soon-to-be grandmother says her body has shown no signs of rejecting her new kidney. She says the man who gave it to her will always be close to her heart.

Now she wants to convince others to consider becoming organ donors too, because they could also be a perfect match for someone they don't know.

"I just want the message to get out that you can survive with one kidney," said Loonan. "The recipient can live a better life, and what a gift to give."