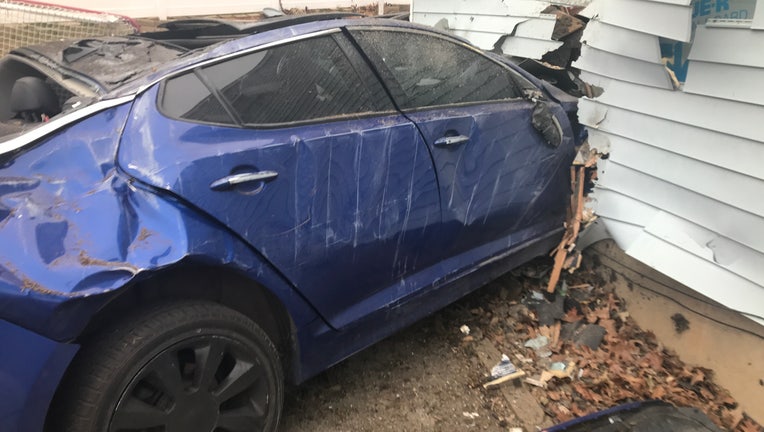 A vehicle crashed into a home in Faribault, Minnesota on Dec. 12, 2020. (Faribault Police Department)

FARIBAULT, Minn. (FOX 9) - Following a brief police pursuit, a car crashed at a high speed into a home in Faribault, Minnesota Friday morning, according to the Faribault Police Department.

At 8:42 a.m., an officer tried to stop a car for "excessive speed" in the 300 block of 9th Avenue SW. When the officer turned on his squad's lights, the car sped off eastbound on 3rd Street SW.

According to police, the office declared a pursuit, but slowed down after a few blocks due to the fleeing driver's unsafe speeds. The officer lost sight of the car, but later found the crash.

Officers learned the car had jumped the curb and struck a home in the 100 block of Tower Place. A woman and her young children were in the home at the time, but were able to get out safely.

The driver of the car, a 19-year-old man, received treatment at Allina-District One Hospital. Police believe he may have been impaired. The passenger, a 20-year-old man, suffered serious injuries and was airlifted to a hospital in the Twin Cities metro. Police believe neither man was wearing a seatbelt.

Both the car and the home received "significant damage."

"We are truly grateful the home owner and her children were not harmed when the reckless driver struck the home," said Police Chief Andy Bohlen in a statement.