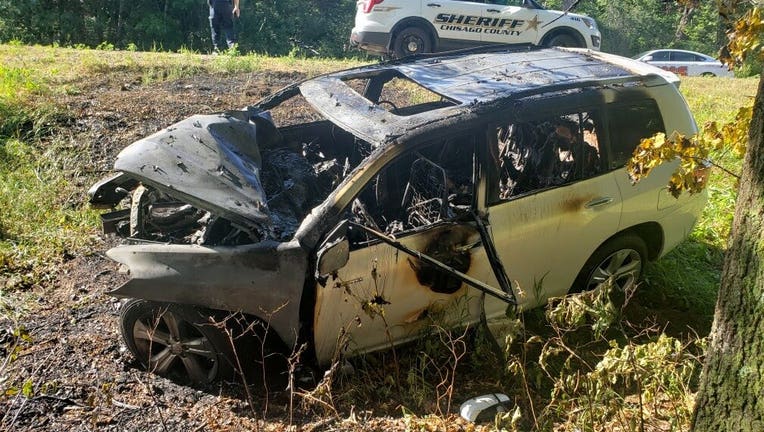 Two good Samaritans saved a man from a burning vehicle in Stacy, Minnesota on June 24, 2020.

STACY, Minn. (FOX 9) - A Chisago County husband and father of four was on his way to dinner Wednesday night, when his life changed in an instant. Lucky for him, two strangers were there when he needed them the most.

“The whole day, the whole day I’ve been thinking about it really,” said Jesse Mishler, one of the rescuers.

A Chisago County husband and father of four was on his way to dinner Wednesday night, when his life changed in an instant. Lucky for him, two strangers were there when he needed them the most.

“Came out to catch some fish and then all this happened,” said Thomas Taylor, who also sprang into action.

Wednesday just before 5 p.m., they were along Stacy Trail near Hemingway Avenue. Taylor had gone out fishing and Mishler was stopping near Stacy Trail to look for turtles with his two young daughters. Both men witnessed the unthinkable: an SUV flying off the road, crashing head on into a tree.

The two jumped into action, smashing the car window with a hammer and worked to do whatever they could to save the victim, 51-year-old Rob Pascavage – a husband and father of four.

“The whole front of the car was engulfed, the entire passenger side was working on being engulfed, the center console was on fire,” said Taylor.

They worked quickly to get Pascavage out, at one point finding strength they didn’t know they had

“We folded the door back and bent the door down,” said Mishler.

“Between me and [Mishler], there was no hesitation we just kept going until we got him out,” said Taylor.

Chisago County Deputy Scotty Finnegan got to the scene two minutes after the initial call and found the car fully engulfed. Miraculously, the victim was injured, but alive thanks to the two good Samaritans.

“This is a prime example of where seconds did count,” said Finnegan.

The two men say they did what they had to do and hope anyone else would do the same.

“Very happy to have been here to help,” said Taylor.

“It was life or death and I definitely didn’t want to see someone die in front of me,” said Mishler.

According to the Chisago County Sheriff’s Office, driver negligence was not a factor in that crash, but a medical issue may have played a part.