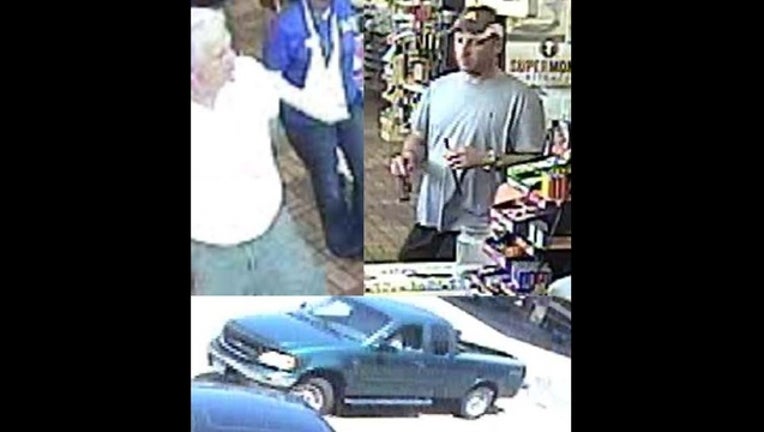 Older man (left) was reported trying to lure a group of young girls into his pickup truck (bottom) at a Super America in Burnsville on Saturday. He left with a younger man (right).

BURNSVILLE, Minn. (KMSP) - Police in Burnsville, Minnesota, are asking for the public’s help in identifying two men were reported trying to lure a group of young girls into their vehicle at a gas station last weekend.

The incident took place shortly after 1 p.m. on Saturday at the Super America on the 1200 block of County Road 42. According to police, a man approached three young girls and asked them to “go over to the pickup truck” he arrived in because he had something “cool” for the girls to look at.

The girls refused to go with the man and he eventually left in the pickup truck, which was driven by a younger man.

The older man is described as having grey/white hair and was wearing dark gray or green shorts and a white shirt. The young man was wearing a grey t-shirt and a Minnesota Golden Gophers visor. He did not interact with the girls.

Anyone with information is asked to call Burnsville Police Detective Christopher Biagini at 952-895-4585.