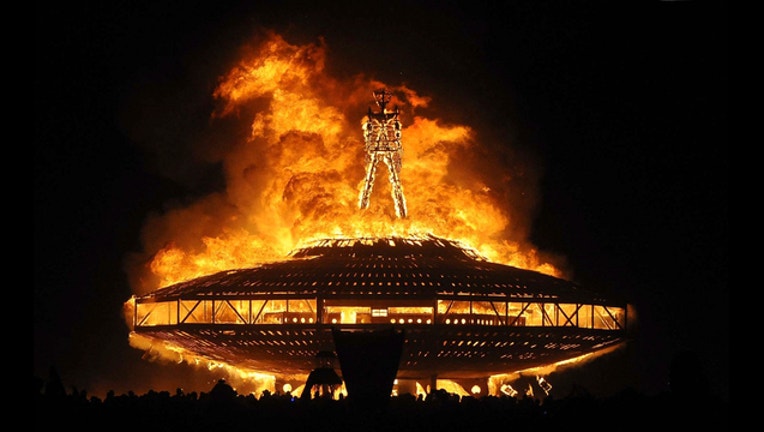 FILE - In this Aug. 31, 2013, file photo, the "Man" burns on the Black Rock Desert at Burning Man near Gerlach, Nev. (Andy Barron/Reno Gazette-Journal, File via AP)

SAN FRANCISCO - The ongoing coronavirus pandemic has canceled just about everything from Easter, sporting events, live entertainment to movies and now: Burning Man.

In a blog post on Friday called The Burning Man Journal, the annual event born out of the Bay Area in the mid-eighties and now held on 'La Playa', is going for a more virtual experience.

"After much listening, discussion, and careful consideration, we have made the difficult decision not to build Black Rock City in 2020," the statement read.

For San Francisco and the greater Bay Area, the annual event usually means a noticeable mass exodus from the city of its 'Burners'. Often described as somewhere between rave, hippie residue and with an emphasis on the arts, the cultural community was set to gather on August 30 through Labor Day Weekend on September 7.

But with mass gatherings now a thing of the past, Burners will have to learn to adapt much like everyone else.

"In 2020 we need human connection and Immediacy more than ever. But public health and the well-being of our participants, staff, and neighbors in Nevada are our highest priorities," the statement read.

Anyone who purchased tickets will be able to get a refund. Participants are encouraged to enter the online 'Multiverse' where the promise of building Black Rock City is still a possibility.

"We will tackle this challenge the same way humans across the globe are doing right now — by drawing strength and inspiration from one another. We are all Burning Man," the statement summarized.

Organizers hope to hold a mass gathering ceremony in 2021. As many as 70,000 people flocked to the event five years ago.

The origninal Burning Man ceremony was held in 1986 on San Francisco's Baker Beach.