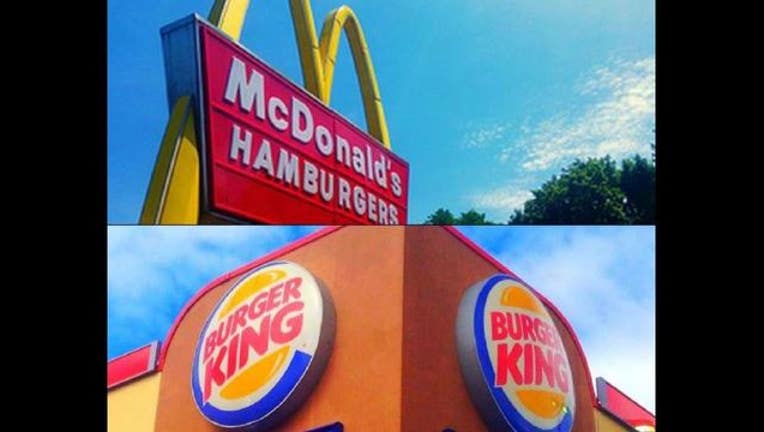 NEW YORK (AP) -- This probably isn't what the United Nations had in mind when it established the International Day of Peace: Burger King is asking McDonald's to join forces to create a "McWhopper."

In full-page newspaper ads Wednesday, Burger King said it's calling for a truce with McDonald's so that they can create a mashup of their most famous burgers -- the Big Mac and the Whopper. Burger King says it wants to serve the concoction for a single day at a popup location in Atlanta, a midway point between the headquarters of the two chains.

Burger King is tying the publicity stunt to a nonprofit called Peace One Day, which says it promotes Peace Day. The United Nations created the International Day of Peace in 1981 to coincide with its annual opening session in September. It then designated Sept. 21 as the annual "day of non-violence and cease-fire" in 2001.

In a response posted on its Facebook page, McDonald's CEO Steve Easterbrook said the proposal was inspiration for a good cause, and that he thinks the two companies could do "something bigger to make a difference." Then he took a dig at the ploy by Burger King.

"Let's acknowledge that between us there is simply a friendly business competition and certainly not the unequaled circumstances of the real pain and suffering of war," Easterbrook said.

He added "P.S. A simple phone call will do next time."

The proposed mashup of the Big Mac and Whopper would include elements of each, such as flame-broiled beef patty and a middle bun, according to a website Burger King set up. Burger King notes on the site that it's open to discussing the proposal, but that details would have to be worked out in time for Peace Day.

"Proposals like McWhopper make noise," Burger King says in a video on the site.

Burger King said the ads asking McDonald's Corp. about the proposal were to run Wednesday in The New York Times and The Chicago Tribune, the latter of which is based near McDonald's headquarters in Oak Brook, Illinois.

Burger King, based in Miami, is owned by Restaurant Brands International, which also owns Tim Hortons.