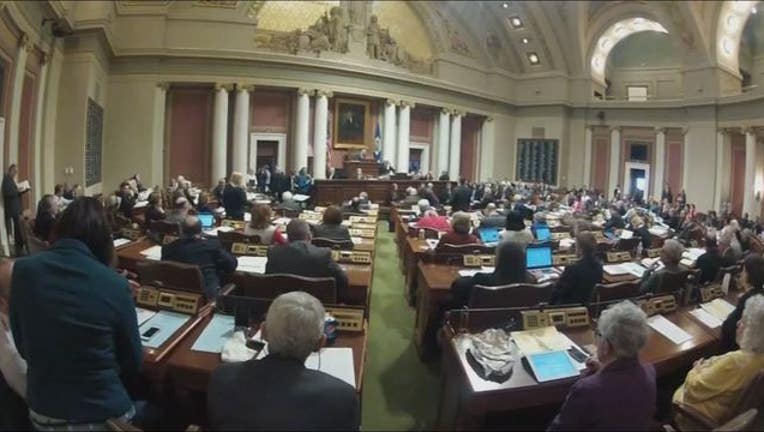 Possible cuts to state agencies and big tax breaks began to materialize this week as House and Senate Republicans started releasing detailed budget plans with a $1.65 billion surplus in hand. It's just the first act in a budget surplus that will ultimately be determined in private negotiations with Democratic Gov. Mark Dayton later this spring.

Here's a look at how the budget fight is shaping up:

Just because there's a hefty surplus doesn't mean there won't be cuts.

Republicans have mapped out hundreds of millions of dollars in unspecified cuts to state programs, including across-the-board reductions to nearly every state agency that would eliminate 4 percent to 7.5 percent of funding in a Senate state government budget bill. Those measures are part of the GOP's effort to both tamp down governmental spending while issuing major tax breaks.

It puts the Legislature on a collision course with Dayton, who warned in a letter to legislative leaders last week that blunt cuts could make end of session negotiations messy. Dayton's cabinet members backed up the governor's assertion that such cuts would impact Minnesota residents: Department of Revenue Commissioner Cynthia Bauerly said the cuts could mean 200 fewer employees, resulting in delays delivering tax returns.

"This arbitrary cutting of agency budgets is an approach that the governor does not support," Minnesota Management and Budget Commissioner Myron Frans said.

One thing is clear: Republicans are going big on tax cuts.

House Republicans have lined up $1.35 billion in tax breaks including a new tax credit for college graduates paying off loans, exempting up to $60,000 of Social Security income from taxes. It would also remove the automatic increases to the state's cigarette taxes.

The Republican Senate bill clocks in smaller, at $900 million. And while the Senate hasn't yet put detail to that round number, it plans to include a cut to the state's lowest income tax rate -- a reduction that would benefit nearly every Minnesota taxpayer.

No matter the details, the debate over tax relief will consume the budget-setting process until the late May deadline to finalize a spending package. While the GOP is hungry for tax relief after three years without a tax bill, Dayton has envisioned a far smaller package of tax credits, and criticized Republicans for big tax measures he said could imperil the state's strong financial standing.

"They're setting the state up for another fiscal crash," Dayton said.

While some slices of what will become a $45 billion-plus budget materialize, the biggest -- and perhaps most controversial -- chunks are yet to come.

More than two-thirds of the state's budget goes toward public schools and health and human services programs, neither of which had been unveiled in the House or Senate. Both could be pivotal in deciding whether the session ends cleanly or in a stalemate.

Dayton is seeking $175 million in an education budget to expand a new preschool program. And Republicans need to line up hundreds of millions of dollars in cuts from health services that could raise Democratic ire.

There's more in the budget to argue over than just dollars and cents.

Dozens, if not hundreds, of pages of legislation gives lawmakers an opening to tuck in smaller policy provisions. That's most evident among major cuts in Republican budgets for environmental agencies, which would also eliminate an environmental oversight board and delay by at least one year the November implementation of Dayton's marquee water quality legislation requiring buffers between cropland and waterways.

After previously warning not to put controversial policy in the budget bills, Dayton lashed out at lawmakers Wednesday and issued a rare veto threat.

"Buffers are non-negotiable and not to be obstructed. I will veto any bill that has any gutting or delay in buffers," he said.