MOSCOW - Brittney Griner spent her 32nd birthday in a Russian prison, awaiting an appeal to her nine-year sentence for drug possession that’s set for next week.

The WNBA star has been especially down lately, according to her lawyers. They were with her for part of her birthday on Oct. 18.

Maria Blagovolina, a partner at Rybalkin, Gortsunyan, Dyakin, said it wasn’t much of a celebration, but that Griner’s attorneys passed along well wishes from family and friends.

"She did smile, it was really good to see her smiling," Blagovolina wrote in an email to The Associated Press.

"Thank you everyone for fighting so hard to get me home. All the support and love are definitely helping me," Griner said.

Griner’s appeal hearing is scheduled for Oct. 25. While it’s unlikely the appeal will overturn her conviction, her lawyers hope it could lessen the sentence.

"We hope the term of the sentence will be reduced," Blagovolina said.

Griner was convicted Aug. 4 in an unusually swift verdict and given a longer sentence than most Russians received for similar offenses. The 6-foot-9 center, who played professionally in Russia during the WNBA offseason, was detained on Feb. 17, a week before Russia invaded Ukraine.

Police said they found vape canisters with cannabis oil in Griner’s luggage at Sheremetyevo Airport in Moscow. Her lawyers said she had been prescribed cannabis for pain, and Griner said she had inadvertently packed them and had no criminal intent. 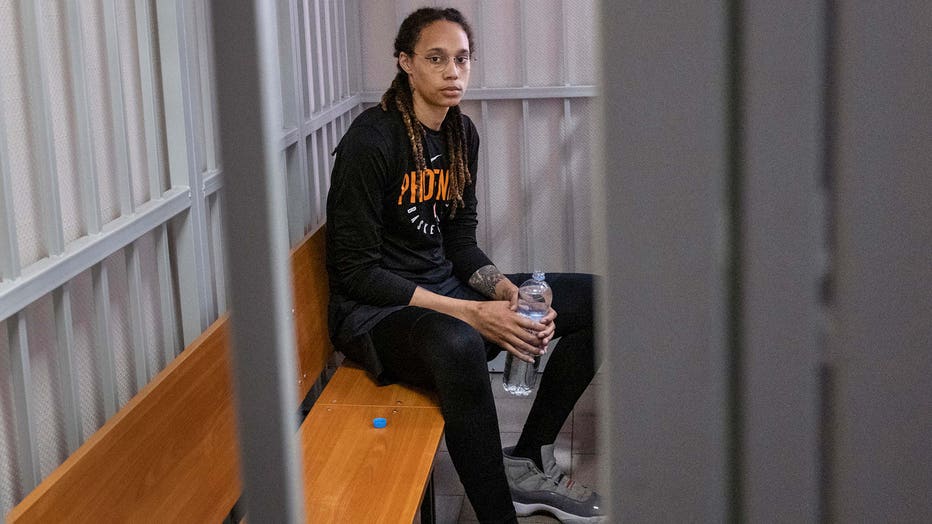 Griner is also waiting for a potential swap of prisoners between Russia and the U.S. Secretary of State Antony Blinken took the unusual step of revealing publicly in July that Washington had made a "substantial proposal" to get Griner home, along with Paul Whelan, an American serving a 16-year sentence in Russia for espionage.

Blinken didn’t elaborate, but The AP and other news organizations have reported that Washington has offered to exchange Griner and Whelan for Viktor Bout, a Russian arms dealer who is serving a 25-year sentence in the U.S. and once earned the nickname the "merchant of death."

The White House said it has not yet received a productive response from Russia to the offer.

Her friends and family are trying to keep Griner’s name in the forefront of people’s minds amid delicate negotiations between the U.S. and Russia that seem to be stalled.

"I pray for her mental health and sanity and us doing what we can do to help keep her name out there," said South Carolina coach Dawn Staley, who coached Griner at last year’s Tokyo Olympics. "To get her home. I hope it’s at a time that’s sooner rather than later. She’s one of our own in an incredible situation, It’s going to take positive synergy, prayers, and some powerful people making some deals to get her home."

"We want to continue to use our platform and the opportunity to shout out a very special member of the basketball community. Brittney Griner’s birthday is today, she’s 32," Curry told the crowd before the defending NBA champions beat the Los Angeles Lakers. "We want to continue to let her name be known and we pray ... it’s been 243 days since she was wrongfully incarcerated in Russia. We hope that she comes home soon, that everybody’s doing their part to get her home."

The U.S. women’s team won its fourth consecutive World Cup title earlier this month and captain Breanna Stewart said that the medal was dedicated to Griner, who would have been on the team had she not been in jail.

Griner was honored when she heard that from her lawyers.